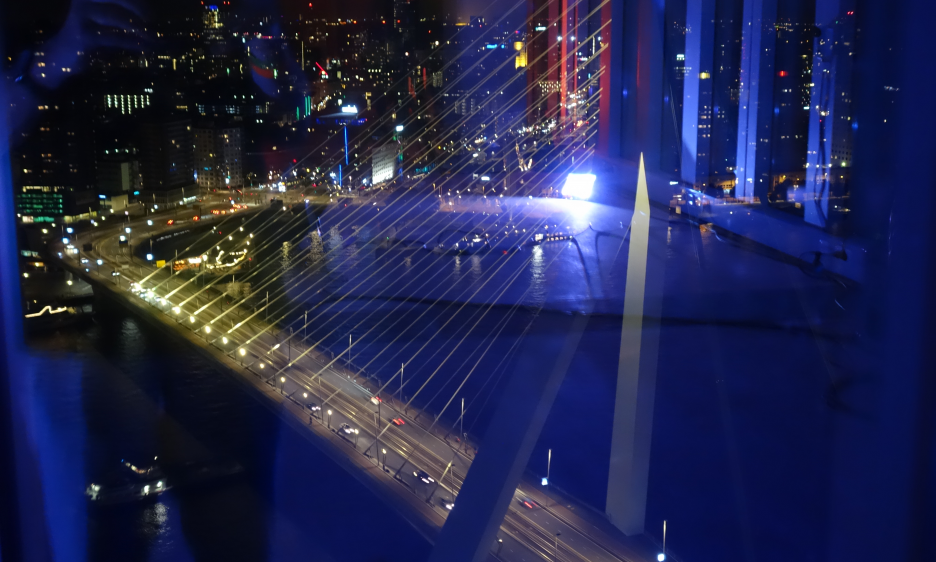 North Sea Round Town is a community-based festival in the port city of Rotterdam (largest port in Europe) situated in the Rhine-Meuse-Scheldt delta at the North Sea. With its 365 concerts spread over 125 locations in the city for 18 days it is an upbeat to the three-days commercial mega North Sea Jazz Festival. The locations are equally as diverse as the broad range of presented music that, for a large part, is integrated in the daily life of ordinary people in the boroughs of the city with its multi-ethnic make-up. More than 50% of the population of Rotterdam are of non-Dutch origin with people from Suriname and the Caribbean, from Turkey, Morocco and Cabo Verde as the largest ethnic groups. This article deals with only one very special event of the program, an 8-hour night concert 100m high above the ground in the largest building in the Netherlands with a broad 3600 view on the city, the river, and the iconic Erasmus Bridge.

This nightly 8-hour continuous stream of improvised music was entitled "Dawn: A Trilogy of Sound," henceforth referred to as Rotterdam Dawn Trilogy (RDT). RDT was an affair of playful particles amalgamating through free improvisation in an hours-long continuous stream thereby generating significant sonic gestures and lines, which worked as sound track of the surrounding real urban life at the gates of dawn. The building served as a relay between the ongoing music, the inner world of the audience members, and the sensations from the exterior, the urban activities and the shifting night—a real dream.

RDT was happening on the 31st floor of the building De Rotterdam, a 3600 space of 890m2 more than 100m height above the urban ground, situated at Rotterdam's Wilhelmina Pier. De Rotterdam, dating from 2013 and designed by Rem Koolhaas, is the largest (not the highest) building in The Netherlands. With its three towers, 44 floors, 160 000 square meters and 150 meters height it offers a magnificent view on the 802-metre long iconic cable-stayed Erasmus Bridge. It is conceived as a vertical city with plenty of functional facilities.

The performances lasted from midnight to dawn into early morning. The music was an 8-hour continuous stream of free improvised music, coming out of small sound gestures wondrously amalgamating, floating, permeating and transforming the space of the 31st floor, enchanting and expanding the senses of the audience. The decision to attend is also a decision to step out of one's own ordinary daily routine, not knowing if you will fall asleep, stay in a waking dream, enter a trance, or will drop out after a while.

RDT event was an exceptional occasion to experience this ambiance in a different way by watching it from inside out at such an exquisite location. Musicians and audience were privileged inhabitants of the vacant 31th floor with its panoramic view for that night. All had plenty of space (as well as time) physically and mentally in which to move. These circumstances, created with verve by curator Raluca Baicu and festival director Michelle Wilderom and greatly organized by the production team und sound technicians, were ideal for the music, music conceived and created on the spot to enliven and permeate the space and being inhaled by the audience. Gradually the music became a soundtrack of the visible urban life, its changing lights, shadows, its observable liveliness, vigor and sensory pulse. As such the passing of time could be experienced in a lucid, subtle way. This gave significance to the abstract music in a very natural, meaningful way—no obstacles whatsoever to go with or to process.

Each corner of the 892m2 floor had its own function, three for the music and one for the catering. Guitarist Bert Cools started (at his electronically well-equipped work station in the first corner) with a circling, gradually expanding multilayered soundscape transporting the audience gently but inexorably to higher regions of perception and experience. His energetically pulsating music lived by a fascinating entanglement of earthy repetitive riffs and lightly floating, curving expansions.

The extension in time and space started to make sense, growing into something unique and hypnotic through the lively flowing dynamics of the improvised music, especially enthralling in the longest stretch, the four-hour middle part of L'Ensemble Ensemble. It was music that just happened, just occurred like the multifarious sounds in nature (biophonics). Just as listening to biophonics can reveal subliminal (sub)melodic traits, the music making of the five musicians gave leeway to similar phenomena. The musicians did not canalize the music. It was kept open and free to amalgamate by itself, just as a matter of impulse giving and following, keeping going, reinforcing or diminishing such that the music can grow on itself. It was a kind of music making reminiscent of Australian group The Necks or Norwegian-French group Dans Les Arbres.

This process-moment music grew out of well-timed and balanced doses of sound gestures made up of various sound particles that were amalgamated by an invisible hand or swarm intelligence. Different from the ordinary visibility of vocalists Mari Kvien-Brunvoll, animal-like, cowered low level against the grand piano contributing mysterious sound particles while waiting for her moment to join with alienated voice that led into the remote pure beauty of singing.

Likewise, atypical and fascinating, Toma Gouband's playing manifested. He is not an ordinary sticks, brushes and mallets drummer. Rather he uses a wide diversity of sound making materials like stones, plant stalks, bunches of flowers etc... It might look weird at first but the richness and subtleties of percussive sounds he knows how to arouse hereby is plainly amazing and of a different order, even when you often do not notice so easily how greatly he is contributing to the whole, enriching it in a unique way. Guitarist Kim Myhr operated more or less inconspicuously seated in the background. Violinist George Dumitriu served as link between piano and guitar, underpinning and coloring with admirable patience and beautiful momentum. The grand piano was the most visible element of the playground. Tirelessly Eve Risser sent impulses lending the music majestic traits and laid bare groove skeletons and introduced formidable stomping figures. The question or fear how the musicians would maintain that long stretch of four hours and remain stimulating and inventive, had already long disappeared as snow in the sun:

"Unforgettable experience, one of the strongest in my life to improvise compositions with friends without speaking for four hours and pieces come out and so and so on...so beautiful experience, very strong for me..." (Eve Risser)

The unit of clarinetist Alex Simu, trombonist Matthias Konrad and guitarist/violinist George Dumitriu then induced the concluding phase with its deeply confluent and long sustained lines, a sound stream now and then slightly shifting in pitch and tone color. Based on the score of the movie "Beyond Sleep" it here functioned as welcoming and celebration of a new day's shining light.

For me personally, RDT was the final part of a marathon-tour starting with the 15-hour opera cycle "Aus Licht" at multidisciplinary Holland Festival in Amsterdam and continuing with 5-hour John Zorn Bagatelles Marathon at 60. Jazz Festival Ljubljana. What comes to mind too are the four-hour performance of The Necks at nightly The Long Now in Kraftwerk Berlin at this year's Maerz Musik and the more than 10-hours Night concert in the active Stefano crater of Greek volcano island Nisyros in August 2016. Also, the 8-hour Un(ter)ort event staged by Kim Kollektiv at Berlin Jazzfest 2018 comes to mind. These events differ in concept and set-up, but share characteristics that will be discussed in a separate article. With RDT Rotterdam has made an advanced, consistent and stimulating contribution to new exceptional forms of music presentation.

Bert Cools (1986) is a Belgian guitarist from Antwerp who studied at Rotterdam conservatory. A versatile musician in a broader range of styles and genres, He founded the platform Granvat that serves as a label and organizes events for with up-and-coming young musicians. His main groups are Book of Air, Hoera, Pudding oO, Ifa Y Xango and the international cross-over group Merope with vocalist Indre Jurgelevicinte. Het frequently collaborates with his brother, drummer Stijn Cools, tuba player Niels van Heertum, Eyvind Kang and Harmen Fraanje a.o.. "Book of Air" for example works on (radical) slow circling repetitive expansiveness.

Kim Myhr (1981) has been on the road for more than a decade as guitarist, composer and sound tinkerer. A good example of the last is his solo-work You | Me, a work created in the studio by thoughtful overlays of a multitude of sound traces of material created together with percussionists Tony Buck, Ingar Zach and Hans Hulbækmo. The work was recently performed live with the mentioned percussionists and three other guitarists, David Stackenäs, Havard Volden and Adrian Fiskum Myhr at Berlin Jazzfest 2018. Myhr, who has employed different compositional approaches and strategies, has, among others, written two remarkable pieces for Trondheim Jazz Orchestra with vocalists Sidsel Endresen and Jenny Hval involved (Stems and Cages, In the end his voice will be the sound of paper). Myhr works on qualities of sound and texture in a diversity of music such as that of Milton Nascimento and Ram Narayan, transposing it into a distinctive new context and a very unique sound cosmos. Other branches of Myhr's broad creational activity are the Norwegian-Australian trio MURAL with wind player Jim Denley and percussionist Ingar Zach, the group Circadia with David Stackenäs, Joe Williamson and Tony Buck, French collaborations a.o. with drummer Toma Gouband and pianist Benoit Delbecq, Norwegian units and his collaboration with dancers, especially Italian choreographer Francesco Scavetta, and dancer Orfee Schuijt. His compositional, assembling and improvisational sides clearly merge and feed into each other.