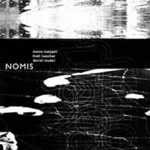 Apparently there's a lot to be said for belabored, overstudied free-bop. Because that's exactly what this album is, and I like it a lot. This trio date from 2003 is finally out, and it's really quite good, despite being just a little too precise in its attempt to be imprecise, if you know what I mean. Which you probably don't. Let me try this again.

The songs here are largely either written by or inspired by Urs Voerkel, whose unfortunate death in 1999 left drummer Marco Kaeppeli and bassist Daniel Studer without a pianist. Fredi Luescher has stepped in for Voerkel, but the group here works out a bunch of "fragments" by him (as well as a strange cover of Jimmie Rowles' "The Peacocks") in a live context, in front of an audience that never makes a sound, except to applaud three or four times.

These songs are either very melodic free jazz or free attacks on very melodic tunes, but they all sound good, even when Studer is sawing away on his bass like he's trying to break it in half. The one with the longest name is the longest in duration, combining a haunting opening by Luescher and a few really spooky passages later with some very beautiful ensemble work. It's one of the few successful attempts I've heard this year at playing both out and in at the same time, and it's kind of epic and inspiring and boffo.

Some others are more conventional: "Er Und Wir" is early Ornette all the way, only being saved from being boring by Kaeppeli's insane drum fills; and "About Omri's Birthday" never really gels, despite having five minutes to do so. But it's still unsettlingly pretty and atmospheric, so I dig it. Plus, someone coughs towards the end, and that's pretty freaky.

I like "News 1-3" too, because it's all based around one repeating figure from the bass which actually approaches avant-funk. It seems like maybe "News 1" is one piano melody and "News 2" is a different one, but "News 3" is obviously the end section where everyone starts going the hell off doing whatever they want. Still vaguely lovely amid all the anarchy, which suits me fine, even though they never really break on through to the other side. But after the tenderness with which they do the Rowles song, I'd forgive these players everything.

So yeah, it's hot like very carefully calibrated picante sauce. I'd like to hear what these musicians have to say when they're playing their own songs. I guess we'll see.

Visit Marco Kaeppeli on the web.