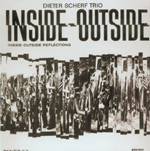 Another historical release in Atavistic's Unheard Music Series, drawn from a seemingly bottomless well of lost or forgotten gems, Inside-Outside Reflections dates from 1974. As with similar releases, this is a welcome addition to the catalogue for both musical and historical reasons. It also saves collectors from taking out a small mortgage to acquire a copy; this one is as rare as hen's teeth on vinyl.

Dieter Scherf is a relatively unknown reeds player, but this should not deter listeners. He is an inventive, free-blowing player who is not short of ideas but does not flit around, either; on each piece here, he is disciplined and focused, establishing and sustaining a mood. At times he is reminiscent of Brötzmann's bull-in-a-china shop approach, but he lacks his countryman's relentless raw power. "Breathcirculation is a particularly appealing track, three minutes of sustained circular breathing that is relentless but avoids the common trap of some such playing, namely over-repetition leading to monotony.

For some, the presence of the 25 year-old Paul Lovens in the drum seat will be a prime attraction of this album. Already well-established and well-regarded by 1974 (Globe Unity Orchestra and Pakistani Pomade, among others, had seen to that), Lovens gives an object lesson in free drumming, interacting with the other members and providing forward momentum without confining their creativity.

The third member of the trio, Polish bassist Jacek Bednarek, also deserves praise. The longest track here, "Processing, provides him with an opportunity to impress, an opportunity he readily seizes. He builds a complex and varied solo that forms the cornerstone of the piece and acts as a launching pad for some adrenalin-fuelled trio interactions, leading into some of the album's best playing.

Prior to this album, the trio toured extensively together, and the playing here demonstrates the kind of interaction that can only develop through regular gigging. The cover pictures firmly set the album in the mid-'70s, including a shot of the group's battered VW touring van. But the music has stood the test of time well—better that the players' hairstyles!