By John Eyles
February 2, 2014
Sign in to view read count 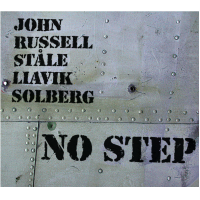 London-based guitarist John Russell and percussionist Ståle Liavik Solberg from Oslo have worked together as a duo since June 2012 when they first appeared together in London and then toured Scandinavia. No Step was recorded in May 2013 at the Blow Out! concert series that Solberg curates in Oslo. It consists of one thirty-three minute piece which shares its title with the album. The relative brevity of the album is more than compensated for by its quality.

Russell and Solberg give an engaging, straight ahead performance without any trickery or flab. Their time spent gigging as a duo has clearly tuned them into the style and patterns of each other's playing. Across the piece, there is not a superfluous or wasted note from either of them. Their music radiates economy, good decision making and taste. Throughout, each is completely wrapped up in the other's playing, responding so rapidly and seamlessly that it is actually impossible to say one is leading and the other following.

In his burgeoning career to date, Solberg has already impressed in the quartet VCDC (voice, cello, drums, clarinet) alongside cellist Fred Lonberg-Holm, and in a trio with pianist Steve Beresford and saxophonist Martin Küchen. His duo with Russell should enhance his growing reputation further still.

Down the years, Russell has repeatedly demonstrated that he is an appealingly sympathetic duo player, with notable examples being Translations (Emanem, 2011) with guitarist Pascal Marzan, Duet (Another Timbre, 2010) with cellist Martine Altenburger and Frequency of Use (Nur/Nicht/Nur, 2003) with saxophonist Stefan Keune. Already, No Step deserves to be mentioned in the same breath as such fine albums.