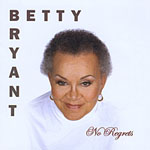 Fondly referred to as the "Cool Miss B," Betty Bryant is a native of Kansas City who relocated to Los Angeles in 1955. One of a thimble full of stalwart female pianists and vocal stylists, Bryant packed the Catalina Jazz Club in Hollywood in November, 2009 to celebrate the release of her appropriately titled No Regrets and her 80th birthday. By the look of the SRO (standing room only) turnout, she needn't have a single compunction; this talented lady and her music are obviously well loved.

Bryant's CD opens with Tomas Gargano pumping his upright bass and Kenny Elliott setting the percussive rhythm, as her voice floats melodically atop on "Let Me Love You." The second time around, she adds her fluid piano accompaniment. The arrangement is clean, ear-catching and builds dramatically, leaving room for Robert Kyle to add a tasty saxophone solo. Bryant has been greatly influenced by her friend and mentor, Jay McShann and the late Gerald Wiggins. In parts, she also appears to have been inspired by Erroll Garner.

Bryant's laidback, bluesy piano style compliments her voice in the most sensitive way, as on "Easy Street" and the title tune. Much like Shirley Horn, Bryant knows how to leave space in her arrangements; using inflection and tonality, she delivers each song with sincere emotion. She is a master of "selling the lyrics." Eighty years young may have minimally affected the vocal prowess of youth, but it has added creative sagacity to the musical mix, exemplified in her inspired phrasing. On "Autumn Leaves" she exhibits classical piano training, both solo and effective. She even adds a taste of Bach and a bit of Sergei Rachmaninoff to sweeten the improvisational flavor.

Bryant proves she can swing on "It's A Wonderful World" and "I thought About You," using sexy little growls and seductive whispers on the latter. The light instrumental "B's Breeze," co-written by Bryant and Kyle, lends itself to an unobtrusive smooth jazz groove Like a soft wind, and features Kyle on flute, while Neal Hefti's popular "Lil' Darlin," promptly returns to Bryant's comfortable bluesy feel. "Night Sounds" is another Bryant original. Well-written, melodic and lyrically compact, it demonstrates one of her musical strongholds: her songwriting ability. Listening to Betty Bryant is an invitation to a seat around the piano bar, and an immersion in both her artistry and the perfectly enunciated lyrics of each song.

Let Me Love You; Easy Street; No Regrets; Autumn Leaves; It's A Wonderful World; I Thought About you; B's Breeze; Lil' Darlin'; Pretty Women; Night Sounds; Be Anything, But Darling Be Mine; Early in the Mornin.'

Dee Dee McNeil is a published songwriter/poet/playwright and freelance journalist.