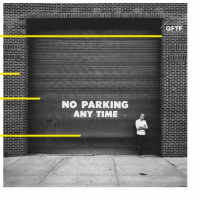 I was beginning to wonder if there were any "blowing sessions" recorded today that did not sound so blatantly contrived. From Berlin comes such a recording by Swiss alto saxophonist Niculin Janett and his quartet. No Parking Anytime features New York City tenor saxophonist Rich Perry, whose own recent Organique (Steeplechase, 2016), with Gary Versace (Hammond B-3 organ), Jeff Hirshfield (drums) has been very well received. This is quietly defiant acoustic jazz, sparklingly new, played through a sepia filter, effecting the best jazz noir in recent memory. This is late-night, soundtrack music: what you would hear playing in the background of a cool and smoky bar scene where a man and a woman drink martinis and plot the end of the woman's husband. The Bogart voice-over coughs, ..."sometimes there is no way out."

A contemplative "Body and Soul" opens the recital. Janett is more Lee Konitz than Art Pepper (early period), with a light, searching tone, well-balanced with a full middle. Janett's reading of the classic is dry and sardonic, strolling past Coleman Hawkins and Johnny Hodges without a thought. "Alternate End" brings in Rich Perry for some embedded counterpoint that could have been arranged by Gil Evans had it not been so superbly so by the leader. The disc contains a couple of angular bop tunes: "30 Orchard Street" and the circuitous "Hypocrisy." The latter piece could be the best hard bop imagined. Drummer Rodrigo Recabarren detonates the post-bop excursion, "Exclamation," a muscular and sinewy original pitting Janett's understated alto with Perry's cool but aggressive tenor. As an entire package, No Parking Anytime is a strong statement for traditional mainstream jazz that is both insightful and imaginative.