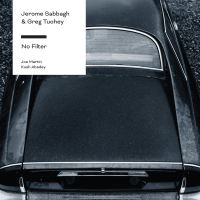 So much regard is given to audio quality in the 21st century that there has become something of an obsession with "purity." A desire for music that has no digital manipulation, no computers layering sounds together. As co-band leaders, Jerome Sabbagh and Greg Tuohey resolved to attain this quality on No Filter by recording the album without edits or overdubs, directly to analog tape.

Everything the listener hears was captured in one take, on paper suggesting a live album recorded in a studio. Not that No Filter sounds like one. The album actually has a smooth, polished feel, never rough or raw. Audiophiles with high-end equipment will be happy, no doubt. Speaking about their decision to record the album in this traditional manner, Tuohey says that "[recording analog] is really about just trying to remove as much 'stuff' between the emotion that we're experiencing, and the emotion that you're hopefully experiencing as a listener."

No Filter, from start to finish, has a "less is more" philosophy backing it. Sabbagh's saxophone is understated throughout, and Tuohey seems content to play guitar to whatever effect the song requires, be it a sorrowful cry or menacing howl. All of the songs on the album are original compositions by the two leaders, who met when they were young college students in Boston during the late 1990s, before moving to New York and forming a short lived band named Flipside. The group released a single album and recorded together for a few years before disbanding in the early 2000s. Tuohey left the jazz scene behind, playing in rock bands for the next decade before returning to jazz in 2013. Sabbagh, meanwhile, released a handful of jazz albums in that time, the last of which featured bassist Joe Martin, who returns on No Filter.

The album begins with the memorable "Vicious," and the ominous, somewhat sinister sounding "Lurker." The former is a unique jazz tune, as both leaders lay melodies over a distinctive, repeating beat set down by Martin and drummer Kush Abadey.

The melodic, anxious tone is predominant in this release, drenched over "Chaos Reigns," the lonely "No Road" and the tense, dreary "Cotton." Tuohey's "Ghostly" is an interesting composition, more intricate and complex than anything else on the album. Not all is dark though, as the quartet finishes the album with Sabbagh's "You Are On My Mind," an upbeat tune that sounds almost celebratory in contrast to those which preceded it.

No Filter works, as a jazz album with a specific, targeted mood. It never feels jarring and none of the songs last more than 7 minutes. The two leaders are so impressive from a songwriting perspective that it's hard not to imagine what this duo might be able to do with a few longer format, slower-to-develop songs, should they continue their collaboration. Regardless, their first album together in nearly two decades is a resonant, thoughtful effort.

Vicious; Lurker; No Road; Chaos Reigns; Ghostly; Cotton; You are on My Mind.