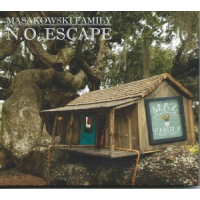 The NOLA Masakowski's are a household name in the New Orleans area. Singer Sasha Masakowski has released several notable CDs including Sasha Masakowski & the Sidewalk Strutters Old Green River (Louisiana Music Factory, 2015); Hildegard (Self Produced, 2015); and Wishes (Hypersoul, 2011). Her father, the principle member here, multi-instrumentalist Steve Masakowski, is on faculty at the University of New Orleans, an educator under whom Katrina-refugee-now-Little-Rock-native Ted Ludwig studied. Bassist Martin Masakowski, Sasha's brother chips in with the one non-family member, drummer Paul Thibodeaux, and with a name like that, he doesn't need to be family.

This merry band got together to flesh out apocryphal original compositions with a couple of tried-and-true of the New Orleans soundtrack, the traditional "House of the Rising Sun" and Sidney Bechet's "Les Oignons." The music has that unmistakable New Orleans feel, the grit in the rhythm that propels these songs as marches and celebrations. The Pater Familias Mazakowski plays guitar, banjo and keyboards in these simply arranged and elegant songs, sung capably by Sasha. While this recording is sonically spare and little more than an EP, it is required listening to what constitutes life in New Orleans: music. We need much more music, and the spirit behind it, like this...