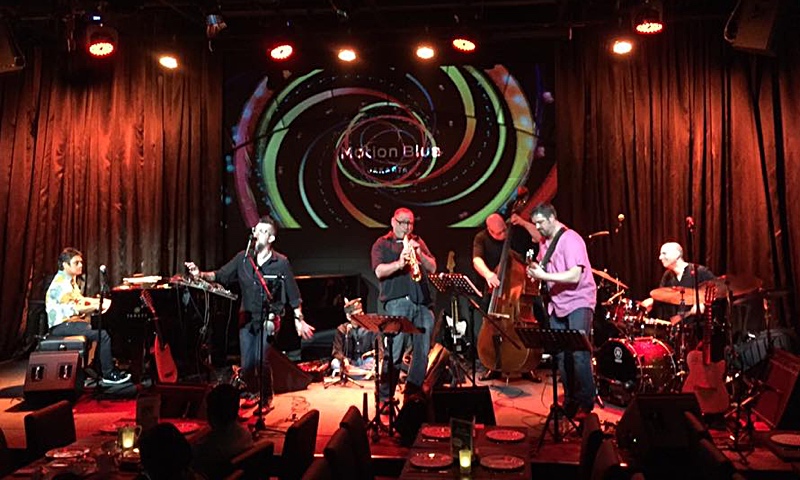 It was supposed to just be a soundcheck and rehearsal. But the energy and focus delivered as Indonesian pianist/composer Dwiki Dharmawan ran his Pasar Klewer band through the various numbers most of this group had recorded in London in 2015 (and had only performed once later in Bali) manifested in what was clearly a tight and orderly rollout. And not without a few twists and turns along the way. Call it the first of four shows.

No doubt, this was a bona fide prelude to that evening's first of three actual performances over four days -first here at the TP Jazz Club in Bandung's Papandayan Hotel, and culminating with two more shows at the Motion Blue club in Jakarta's Fairmont Hotel and the 13th annual Java Jazz Festival that weekend.

The recording in question, the two-disc Pasar Klewer (MoonJune Records), is a kind of magnum opus for the acclaimed pianist, whose classically trained technique and compositional skills spill out in extraordinary fashion. Here in Indonesia, it was most of the Pasar Klewer band with drummer Asaf Sirkis; Nicolas Meier on guitars; soprano/alto saxophonist/clarinetist Gilad Atzmon; vocalist Boris Savoldelli; Dede Yanto played rebab violin, suling flute and tarompet; and bassist Rudy Zulkarnaen (replaced for the following two performances by Pasar Klewer bassist Yaron Stavi). Over four nights, they navigated Dharmawan's complex yet clearly listener-friendly charts as if they'd been on the road for weeks playing this music. The camaraderie between musicians, no doubt, was a factor.

During that rehearsal, a highlight was the band's breakout moment with some up-tempo swing embedded in the otherwise otherworldly "Life Ilir" (featuring a traditional arrangement by Dharmawan), the group performing with refreshing, carefree abandon, tradition jazzily unleashed. It served as a window into Dharmawan's obvious affinities with a triplet swing pulse, enhanced by Zulkarnaen's propulsive, meaty basslines and Sirkis' deft use of cymbals and skins. It also made clear Dharmawan's affinities for Cecil Taylor abstraction and Ahmad Jamal's chordal work. At another point, with Atzmon leading the charge on clarinet, the band took yet another leap into the unknown with a spasm of klezmer energy on the title track. Indeed, this music was to be approached as clay to be remade instead of simply recreated.

This Bandung performance served as a kind of homecoming for Dharmawan, the specially designed band (by MoonJune label head Leonardo Pavkovic) all flown in from different parts of the globe just to celebrate the hometown boy's music and new release.

The formal show, with similar set lists on subsequent nights, kicked off with the fiery "Purnama," featuring Savoldelli's spirited vocals and Atzmon's blazing alto. In fact, both Savoldelli and Atzmon would both utilize electronics to extend the reach of their respective voices here and there, Savoldelli, in particular, selectively sending the contours of his processed voice and delivery into entertainingly abstract realms (e.g., on Robert Wyatt's "Forest"). A favorite was the blues/lament "Bubuy Bulan," where Atzmon once again shined with an aching, mournful delivery, and with more expressive piano from Dharmawan on a tune that hung heavily on a slow march/swing cadence.

As the band migrated to Jakarta for one more club appearance and the festival, it became clear that this was a once-in-a-lifetime opportunity to enjoy a true, passing musical moment. The Motion Blue performance, with a bigger stage and better sound, helped to give voice to more members, especially Yanto, who sat on the floor while he played and sang. Fellow Indonesian guitar great Dewa Budjana (also a 2017 Java Jazz Festival headliner) joined the band at one point for a spirited jam, trading guitar licks with Meier. The transition culminated in what was a veritable spree on the final night, Atzmon essentially dancing across the stage as he wailed, Meier stretching out on guitar in ways that recalled a latter-day Django Reinhardt, Stavi's basslines mesmerizing when they weren't limited to being the band's anchor.

In particular, "London In June" offered yet another side to this band, as their free-jazz sentiments were given another deliciously free rein, Atzmon's soprano once again, in this case, invoking the spirit of John Coltrane and that well-known four-note phrase from "Acknowledgement" on A Love Supreme(as heard on Pasar Klewer).

In all three performances, the climax was the aptly titled show-stopper "Spirit Of Peace," another of the mostly Dharmawan composed pieces that make up Pasar Klewer. The kicker was Sirkis' lively konakol singing as the band rallied behind him. The second tune on Pasar Klewer, it served as the perfect set ender, the music a tantalizing mix of what felt like an Israeli/Arab hoedown, Atzmon's clarinet singing to the rafters as Meier's oud-like guitar enhanced and Dharmawan's exotic pianism all helped to create a swirl of musical magic rare and not likely to be heard again anytime soon.