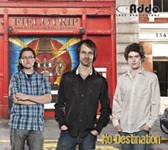 Fieldtrip, a Montreal-based trio comprising alto saxophonist Colin Power, bassist Patrick Reid and drummer Mark Nelson, was formed in 2005 after they graduated from the jazz program at McGill University. The trio builds its music largely in a contemporary frame with elements of classical and new wave music. Much of the mood they evoke is placid and flows in calm waters, but the moments when they get out of that and hit the hard road give their music a solid punch, augmented by saxophonist Kelly Jefferson and guitarist Jim Head.

The expressionist No Destination coalesces the many impulses of the group. The ethereal opening, shimmering in alluring melody, is given its soul by Head and Jefferson. The tempo moves into the upbeat when Power comes in and draws parallel lines with the horn. Imagination is given an extension as Power extols the composition with an innovative attack that sears as it extrapolates the theme.

Intertwining horns are also seen to advantage on "I Am the Imposter," on which the band shifts between bop and a smooth unraveling. Head is at the top quite literally as he lays open the composition, a modulated bop drive before it slips into the other ambit, a path that is also followed by the saxophones. The two profiles shade the harmonic divide.

Rumination and meditative discourses construct the hub around which the compositions revolve, even if the arrangement gives the musicians the leeway to break open. In all of this one congruent aspect is the interaction, particularly between Power and Jefferson, with Jefferson showing his usual bite and sense of daring. He does this to a nicety again on "A Wolf in a Sweater."

The mood may largely be an easy one but the inherent musicianship is not effaced.

I Am the Imposter; Hymn (The Fringe is My Home); A Wolf in a Sweater; Here to Resilience; Sounds on Silence; Sweet Insignificance; Do Not As I Do; Samadhi; Grass Stains; No Destination.