BY DAN MCCLENAGHAN
April 28, 2012
Sign in to view read count 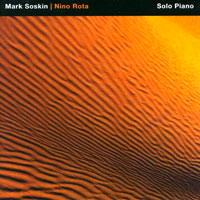 Mark Soskin is probably best known for his work with saxophone legend Sonny Rollins. As Rollins' pianist from 1978 to 1991, he contributed to a string of several marvelous CD releases on the Milestone label. These included Dancing in the Dark (1987), which opened with a masterfully straightforward cover of the pop song, "Just Once," that featured Soskin's sparkling electric keyboards.

Soskin's work with Rollins was mostly in the realm of jazz standards, Great American Songbook tunes, and the saxophonist's engaging originals. For Nino Rota, the pianist's third solo piano outing, he chooses to go with a theme-based project: an exploration of the music of the famed Italian tunesmith.

Nino Rota (1911-1979) was an Italian composer best known for his film scores. In the United States, it was his soundtracks for The Godfather (1972) and Romeo and Juliet (1968) that shone the brightest lights on his artistry. Here, Soskin shines his own personal light on some of Rota's compositions, catching the spirit of Rota's music and melding it with his own identity.

Unlike much of his work with Rollins (where much of the beauty of the music came from a forthright temporal transparency of approach to often familiar melodies), this Rota remembrance has cerebral depth and a resonant holiness, like music composed in cathedrals but imbued with moods and emotions from outside the reverential rooms. In fact, the sound of Nino Rota, with its reverberant ringing, gives the music—Soskin's explorations of, ruminations on, and deconstructions of Rota's tunes—a quality of sublime timelessness.

Two of Rota's most recognizable works are here, "The Godfather—Theme," treated as a minor blues, and "The Godfather—Waltz." "La Dolce Vita—Suite 1" is the liveliest, most percussive piece on the album, shifting from an angels-drifting-in-the-clouds-above opening to a late-night-in-a-dim-barroom groove.

Soskin wraps up the set with "The Acrobat (From 7 Pieces for Children)"—an original Rota piano composition, rather than a film score. It is a simple, hopeful, beautiful tune, perfect for closing out this outstanding solo piano offering.