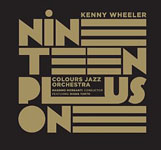 Following Kenny Wheeler's career can be a knotty proposition. Born in Canada, the trumpeter/composer relocated to Britain in the 1950s, becoming an integral part of its jazz scene. He recorded for Germany's ECM Records for over two decades, including the classic Gnu High (1976) in addition to his Azimuth collaborations with pianist John Taylor and singer Norma Winstone. More recently shifting his affiliation to Italian labels including EGEA and CAM Jazz, he's focused largely on small groups, though he's made a handful of albums for larger ensembles, including Music for Large & Small Ensembles (ECM, 1990). Regardless of context, the emphasis has always been on his own inimitable writing, making Nineteen Plus One a distinct entry in his discography.

Collaborating with Italy's brass-heavy Colours Orchestra, Wheeler brings his densely modernistic harmonic approach to rearrangements of seven standards. From the brief fanfare of "Only the Lonely" to the more expansive "All or Nothing at All," "How Deep is the Ocean" and "When Your Love Has Gone"—all exceeding ten minutes, with plenty of solo space for the Orchestra as well as Wheeler—it's no surprise that, despite an unfailing allegiance to the essence of these enduring songs, they sound as if Wheeler wrote them in the first place.

As if to hammer that point home, the disc ends with Wheeler's sole original— "W.W.," from Wheeler's quintet date Double, Double You (ECM, 1984) and later reworked for larger ensembles including Finland's UMO Jazz Orchestra on One More Time (Challenge, 2000). Contrasting UMO's more left-of-center disposition, Colours is a warmer, more centrist affair, swinging amiably through this and all of Wheeler's charts, with singer Diana Torto capably handling Wheeler's melody lines, originally written for Winstone, with equal aplomb. Wheeler's writing possess a characteristic melancholy; joining this one original with his standards arrangements further clarifies the distinctive touch found in anything on which he lays his hands.

Saying that Wheeler's playing remains strong for a man in his eighties would be unfair; surrounded by a group of fine players—including conductor Massimo Morganti, who puts his baton aside for a concise, plangent trombone solo on "How Deep is the Ocean"—Wheeler's ability to weave lyrical lines with brief intervallic leaps into the stratosphere remains a stylistic touchstone few players half his age can match. Torto's lyric interpretations reference Winstone's less-is-more approach, though she demonstrates greater extremes in the thrilling duet with drummer Massimo Manzi that closes "W.W." Guitarist Luca Pecchia receives a moment in the spotlight during the intro to "I Should Care," solely supporting Torto before the ensemble enters to paint a broader palette, which in turn bolsters the guitarist's lithe solo and a particularly fluid feature from Wheeler.

The material may be familiar, but the interpretations are completely fresh. Winstone's assertion that Wheeler is "the Duke Ellington of our times" is borne out by Nineteen Plus One. Few musicians alive can be recognized for their charts after just a few notes, or are as capable of making material recorded thousands of times their own within the space of a few short bars.

Only the Lonely; All or Nothing at All; How Deep is the Ocean; Stella By Starlight; I Should Care; When Your Lover Has Gone; The Man I Love; W.W.