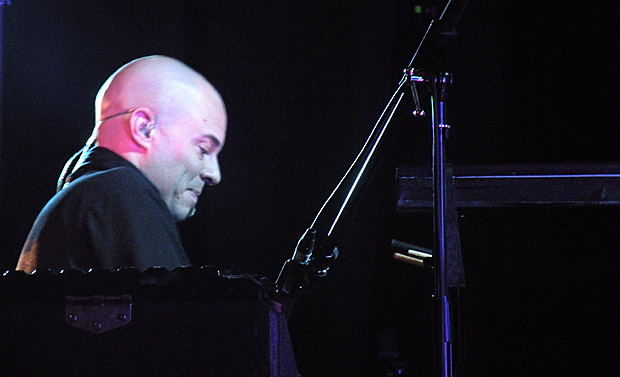 Looking at the listings for day six of the London Jazz Festival, the term "spoilt for choice" sprang to mind. At the Barbican, pianists Stefano Bollani and French veteran Martial Solal led a double bill supported by Marcin Wasilewski's piano trio; at the Purcell Room, rising stars Phronesis promised a night to remember in a concert without lights, entitled Pitch Black, while at the Queen Elizabeth Hall, the Soul Rebels Brass Band offered up the spirit of New Orleans inflected with modern urban-dance grooves. And playing King's Place was Nik Bärtsch and his band Ronin, singular purveyors of Zen-funk. All in all, it was a typical day at the London Jazz Festival, which this year hosted an incredible 280 events across the city in ten days.

After some delicious agonizing, Nik Bärtsch's Ronin proved the strongest draw personally, intrigued as I was by the chance to see the quartet with its new bassist, Thomy Jordi, who replaced charter member Björn Meyer earlier this year. Meyer's decision to quit Ronin after a decade was down to an increasing desire to further explore his own music. For a number of years he has pursued a more folkloric music in Bazaar Bla, with Iranian singer/musician Asita Hamidi's Bazaar, and in collaboration with Tunisian oud player Anouar Brahem on The Astounding Eyes of Rita (ECM, 2009). Jordi, however, was no stranger to Ronin before joining full-time, having sat in with the band on occasion—alongside Meyer—during its legendary Montags concerts. Fundamentally a funk bassist, Jordi used "Modul 27" as his wedding song in Tokyo, and has clearly found a home in Bärtsch's idiom of ritual groove music.

The set drew largely from Llyrìa (ECM, 2010), and the quartet's increasing emphasis on melodies independent of the trademark layered rhythms was evident throughout the 100-minute performance. The hypnotic, meditative grooves of Ronin's CDs are best experienced in one uninterrupted sitting, as Bärtsch's "Moduls" flow into each other with a seamless logic, like a cycle of waves. However, a pleasing aspect of this concert was the upending of Llyria's song order, with six Moduls repositioned in exciting juxtaposition. Bärtsch lifted the pieces, and with flair, recast them like a vast cubist jigsaw.

The music birthed slowly, Bärtsch's damped piano strings creating a near-subliminal drone as percussionist Andi Pupato stirred the silence with deft touches on customized udu and hand-held bells. Jordi's bass ostinato and Kasper Rast's sharp, drum-rim rhythm set the course, while Sha's bass clarinet hummed and growled moodily. It was a full five minutes before Bärtsch's familiar train-rhythm piano motif signaled the arrival of "Modul 47." Pupato's role—so subtle on CD—was striking, leaving as big an impression on the music, in his own way, as percussionist Jamie Muir had in early-period King Crimson, though with more method and less of the madness. A tap of the frame drum, quivering bells, stroked mini-chimes, a stick against a suspended copper water drum—every touch animated the music. In Ronin, small gestures set in motion large waves.

Cues were mostly visual, though Bärtsch's cry signaled the end of the cinematic "Modul 52," whose relentless charge was led by Rast's drum work, simmering and cracking in turn. The pulse of the brooding "Modul 53" was created by Pupato on shaker, and the infectious, almost ominous piano mantra was underpinned by Sha's slyly purring bass clarinet. The meditative "Modul 55" followed very naturally, with its equally relaxed pace, though it exhibited considerably less gravitas. With the rhythm momentarily suspended, Sha's alto sax and Bärtsch's gentle piano provided an oasis of stark intimacy.

With silence an integral part of it, applause could either intrude or provide release of tension, but even at its most chamber-like, the music was pervaded by an intensity. The heady "Modul 49_44," however—full of stuttering rhythms and explosive drumming—finished in such dramatic exclamation that applause burst forth spontaneously. The warpath funk of "Modul 51" featured thrilling play from Pupato and Rast, with Bärtsch, Sha and Jordi laying down interlocking lines whose hard groove was very much the sum of its parts. An abrupt ending left little time to draw breath before Jordi's bass line led the quartet into the episodic "Modul 45" from Holon (ECM, 2008). Sha and Jordi delivered short, lyrical statements over Bärtsch's dreamy, high-register tinkling before the leader's cry upped the tempo and ushered in a piercing Arabic lament from Sha's alto. A stunning, percussive crescendo served as the conclusion and made for yet another instance of high drama.

The encore, a powerful, 18-minute Zen funk workout with Bärtsch on Rhodes, sounded like "Modul 38_17" from Stoa (ECM, 2006) but it might not have been. No matter, because after all, what's in a name? An extraordinary final six minutes saw Jordi, Rast and Pupato gradually lower the flame of the groove to nothingness, proving one final time that an economy of notes can, like the leanest poetry, convey rare depths of emotion.