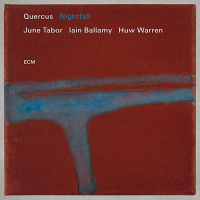 It may have taken seven years for the innovative British trio featuring singer June Tabor, saxophonist Iain Ballamy and pianist Huw Warren to find a label and release their first album together, but they sure landed on their feet. Not only was the trio's 2013 debut, Quercus, released on the renowned ECM imprint; it was also enthusiastically received by critics and fans alike, winning that year's prestigious German record critics' Preis der deutschen Schallplattenkritik, Jahrespreis (Album of the Year). And so, it's very good news that the trio named after its ECM debut has managed to release Nightfall a mere 17 months after its live recording at Cooper Hall in Frome, a small town in the southwest of England.

And a fine album it is, representing an inevitable and consequential evolution of the language first hinted at on Tabor's At the Wood's Heart (Topic)—her tenth album working with Warren but her first with Ballamy and, no doubt, the session where the seeds of Quercus were first sown.

That Quercus has been so well received is, of course, no surprise to any who had the good fortune of seeing this trio in its earliest years. Bringing British traditionalism (and music farther afield) together with improvisational explorations that push each song's boundaries while remaining true to its heart, the trio's 2007 performance at Kristiansand, Norway's Punkt Festival was a deep, dark and beautiful confluence of disparate musics and interpretive ideas that, on paper, might have seemed incongruous but, in the hands of Tabor, Ballamy and Warren, clearly posited a new and eminently alluring musical syntax.

A longtime favorite of the British folk scene, with a somber, low register voice and sparse delivery that have only become more so with the passing of years, Tabor has long stretched beyond the admittedly expansive confines of traditional music with a discography ranging from the bleaker atmospheres of 1983's Abyssinians (Shanachie) and more balanced Silly Sisters (Shanachie, 1976)—the first of two duo recordings with Steeleye Span's Maddy Prior—to albums focused on jazz and Great American Songbook standards, like Some Other Time (Hannibal, 1991)...all preparing Tabor for the emergence of Quercus, where the singer's characteristically spare, subtly embellished and faithful (to her own conception) delivery is taken, by Warren and Ballamy, into unexpected terrain, only to be drawn back by Tabor...the group's clear anchor and structural lightning rod.

That Tabor adamantly refuses material that doesn't resonate deeply within her only means that, no matter what musical sources upon which the trio draws, anything she chooses to sing resounds with unfailing verisimilitude. That she largely leaves the improvisational forays to Ballamy and Warren does not, however, mean that there's a lack of interpretation (or predictability) in her delivery; far to the contrary, there's never been a performance of "Auld Lang Syne"—that most common of songs, sung in many countries around the world at the start of the new year—like Nightfall's opener, significantly re- harmonized by Warren and Ballamy, but also featuring a substantially altered vocal melody.

"Once I Loved You Dear (The Irish Girl)" may feel more firmly aligned with its traditional roots— adhering more strictly to form than some other tracks, where Warren and Ballamy soar off into completely unanticipated directions, only to be brought back by the ever-faithful Tabor—but the repeated, ascending three-chord pattern that acts as both a bridge between verses and a jumping off point for some conversational interplay between the pianist and saxophonist is clearly part of the arrangement fashioned by all three musicians.

And that is one notable difference between Quercus and Nightfall. Like its predecessor, Nightfall has some songs that are not specifically arranged—one jazz standard ("You Don't Know What Love Is"); one Great American Songbook song ("Somewhere," from West Side Story); a tune by Bob Dylan ("Don't Think Twice It's Alright); and one instrumental each from Warren (the elegiacally lyrical "Christchurch," feeling, in some ways, like it could have come from the pen of label mate Ralph Towner) and Ballamy (the smokier, late night ambience of "Emmeline")—but of those that are, every one of them is, this time, credited as a group arrangement. With Quercus' identity becoming increasingly well-established through additional touring, it's clearly become a more equilateral triangle from conception to execution, with arrangement ideas coming from all directions.

Both in their mid-fifties, Warren and Ballamy are largely considered part of the jazz continuum, though both have participated in projects that stretch its broadest boundaries, from Ballamy's tenure in drummer Bill Bruford's first, electro-centric Earthworks incarnation from 1987 through 1994 and Warren's participation in saxophonist Lara James' more chamber-like The Glittering Plain (Signum, 2012) to the saxophonist's own projects, including the longstanding Anglo/Norwegian collaboration Food; the pianist's extraordinary tribute to the great Hermeto Pascoal, Hermeto + (Basho, 2009); and the pair's participation in undervalued guitarist Billy Jenkins' equally overlooked Still Sounds Like Bromley (Babel, 1995).

But with even more broad-reaching projects between them, Warren and Ballamy are the ideal partners for Tabor's faithful yet distinctive vocal renditions, bringing truth and emotional profundity to whatever material is deemed suitable for Quercus...and with the saxophonist, in particular, coming so closely together with Tabor as to sound nearly, at times, as one. The singer's firm but pliant voice is, in fact, the starting point for one of Ballamy's most impressive solos of the set: a crepuscular reading of "You Don't Know What Love Is" that is suitably husky, deeply rooted in the jazz tradition and built with vivid compositional focus. Elsewhere, despite her allegiance to its familiar melody, Tabor makes a relatively faithful look at "Don't Think Twice It's Alright" her own with the subtlest of gestures, while Warren's harmonic ambiguity and Ballamy's intuitive responses to Tabor's unadorned yet inimitable delivery of "On Berrow Sands"—recounting the tale of a ship going down in the treacherous waters of the Bristol Channel, and folklore that suggests the gulls soaring over the channel embody the souls of those who drowned—capture the implication of its stark and minimal prose:

Away ...
Turf nor grass is never our bed.

Away ...
Shimmering sands do shroud our dead.

Away ...
They cry as they fly over Bleadon Town.

Away ...
On Berrow Sands our ship went down.


Throughout Nightfall's 65-minute program, Warren's deft touch and focus work in perfect tandem with the equally keen-eared Ballamy to create a flowing, floating context for Tabor that's both definitive and liberated—straddling that fine line between fixed frameworks and extrapolative extemporizations even more elegantly than on the trio's impressive 2013 debut. Continuing to hone Quercus' distinctive blurring of stylistic, genre-specific and interpretive boundaries, the thoroughly appealing Nightfall represents slow but steady growth for this trio of fine British musicians who may have built their individual reputations in other circumstances, but who are perfectly matched in this special place where music from across the centuries, across the ocean and across many cultures meet with an unrelenting combination of honesty, truth...and magic.

Auld Lang Syne; One I Loved You Dear (The Irish Girl); On Berrow Sands; Christchurch; You Don’t Know What Love Is; The Manchester Angel; Don’t Think Twice It’s Alright; Emmeline; The Shepherd and His Dog; The Cuckoo; Somewhere.