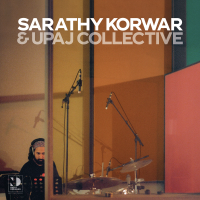 In her October 2020 interview with All About Jazz, baritone saxophonist, Collocutor bandleader, Afrobeat shaman and Upaj Collective founder member Tamar Osborn was asked to name six of her all-time favourite albums. One of them was Shakti's Natural Elements (Columbia, 1970), on which John McLaughlin plays a guitar customised to sound like a sitar. "To me, it's still one of the best meetings of two traditions you can listen to," said Osborn. "You can hear the mutual respect, the communication and the joy of playing together."

Those same qualities run through drummer and tabla player Sarathy Korwar and Upaj Collective's Night Dreamer Direct-To-Disc Sessions. It is Korwar's second album with Upaj—the first being the modern day Indo-Jazz classic My East Is Your West (Gearbox, 2018). The new album is another adventurous transcultural hybrid, its two main strands once more being spiritual jazz and Indian classical music.

My East Is Your West was recorded by an eleven-piece, Night Dreamer Direct-To-Disc Sessions by a quintet. There are three returnees from the larger lineup: Osborn, guitarist Giuliano Modarelli and keyboardist Alistair MacSween. The new member is violinist Achuthan Sripadmanathan. The crucial difference between the two albums, however, is the nature of the music making itself. In Hindi, upaj means "to improvise." My East Is Your West took as its jumping-off points carefully crafted arrangements of well-known spiritual jazz and Indo Jazz tunes by Amancio D'Silva , John McLaughlin, Pharoah Sanders, Alice Coltrane, Don Cherry, Ravi Shankar and Joe Henderson. On Night Dreamer, on the other hand, the group approached the material with more skeletal road maps, trusting instead on in-the-moment interaction. They pull it off with style.

The fifth and final track sounds like a remix, so whether it is really live and direct-to-disc is unclear. It is, however, groovalicious. And so, too, is the rest of the album. Another stone delight from Upaj Collective.