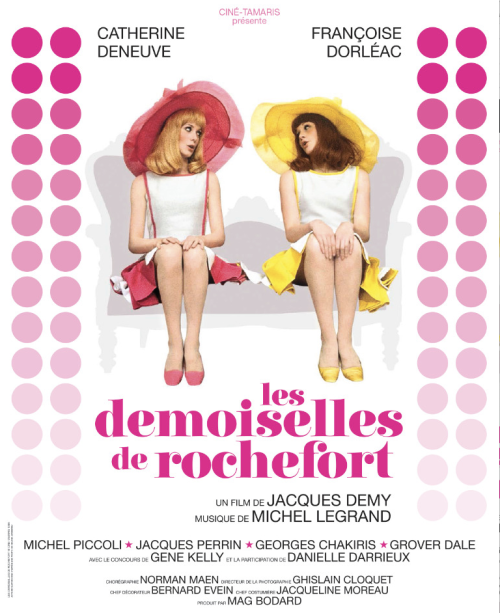 slideshow
What better way to start the new year than watching a pristine print of The Young Girls of Rochefort? Directed by Jacques Demy, the music was composed by Michel Legrand to Demy's lyrics, and the choreography was by Norman Maen. It was a followup to Demy and Legrand's Umbrellas of Cherbourg (1964).

The film-musical takes place in Rochefort, an actual town along the west coast of France. During the summer of '66, a caravan of trucks arrives in the town square to set up a fair that will last the weekend. Local talent is included. Much happens over the next two days concerning song, dance and love. The film stars Catherine Deneuve, Françoise Dorléac (the actress-model and Deneuve's older sister), George Chakiris, Michel Piccoli, Jacques Perrin (the sailor), Grover Dalem, Geneviève Thénier and Gene Kelly.

The film has a bit of a cult following (I count myself among those intoxicated by the music and spirit). After you watch the print below (and don't click on the following links until you've watched the film), you'll find behind-the-scenes documentaries here, here and here. The last time I posted on this film was at the beginning of the year, here.

A few notes. The proprietor of the cafe in the square (and mother of the sisters in the film played by Deneuve and Dorléac ) was played by Danielle Darrieux, who had one of the longest careers in French film history, appearing in 110 movies over eight decades. In The Young Girls of Rochefort, her role was the only one in which a principal actor in any of Demy's film-musicals sang his or her own musical parts. All the other actors had a separate person dub their singing parts. Darrieux was a concert singer in the '60s. Also, an English language dub of the film was made for the American market, though it thoroughly lacks the essential French charm. A rare clip of the English version is here.

Here's The Young Girls of Rochefort. The resolution is great, so expand the film to fill your screen. Happy New Year!...