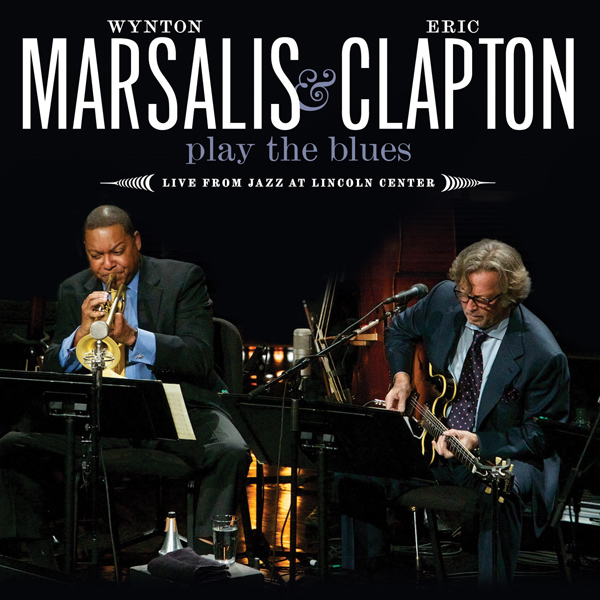 Available September 13 On CD And CD/DVD

LOS ANGELES—New York City's premier jazz venue got the blues last April when Wynton Marsalis and Eric Clapton performed together in Rose Theater at Frederick P. Rose Hall, home of Jazz at Lincoln Center for two sold-out shows dedicated to vintage blues. The extraordinary collaboration, billed as Wynton Marsalis & Eric Clapton Play The Blues, paired these musical virtuosos with members of the Jazz at Lincoln Center Orchestra as they brought to life a repertoire of songs selected by Clapton and arranged by Marsalis.

Reprise Records captures the magic of these unprecedented shows from earlier this year on CD and as a CD/DVD combo that both feature selections taken from the two public concerts (April 8-9), as well a special performance for Jazz at Lincoln Center's annual gala (April 7). Wynton Marsalis & Eric Clapton Play The Blues—Live From Jazz At Lincoln Center will be available September 13 at physical and digital retail outlets for suggested list prices of $18.98 (CD), $24.98 (CD/DVD) and $9.99 (digital; audio only). The DVD will also feature a bonus performance of the classic “Stagger Lee" from legendary bluesman Taj Mahal's opening solo set for these special shows.

Marsalis, Artistic Director of Jazz at Lincoln Center and nine-time Grammy® Award winner, writes about his collaboration with Clapton, a 19-time Grammy recipient, in the album's liner notes: ..."we wanted these concerts to sound like people playing music they know and love, not like a project."

To help them achieve that level of devotion, Marsalis and Clapton were joined on stage by Dan Nimmer (piano), Carlos Henriquez (bass), Ali Jackson (drums), Marcus Printup (trumpet), Victor Goines (clarinet), Chris Crenshaw (trombone, vocals), Don Vappie (banjo) and Clapton's longtime keyboardist/sideman Chris Stainton. Marsalis says the group combined the sound of an early blues jump-band with the sound of New Orleans jazz to accommodate the integration of guitar/trumpet lead, a combination that gave the musicians the latitude to play different grooves, from the Delta to the Caribbean and beyond.

The band nimbly navigated a diverse set list that touched on different styles, from the four-on-the-floor swing of Louis Armstrong's “Ice Cream" and the southern slow-drag of W.C. Handy's “Joe Turner's Blues" to the traveling blues of “Joliet Bound" and the boogie-woogie jump of “Kidman Blues." After opening the shows with his solo set, Mahal returned to join the band on “Corrine, Corrina" and the New Orleans funeral standard “Just A Closer Walk With Thee."

The one song not selected by Clapton for the show was his own “Layla," which was requested by bassist Henriquez and arranged as a Crescent City dirge to tremendous results. On his review of the performance, David Fricke of Rolling Stone wrote: “In the [song's] instrumental break, Clapton hit a series of stabbing licks lightly crusted with distortion, followed by Marsalis' slow parade of clean hurting peals&#151a moving dialogue in lovesickness and blues routes."