SOURCE: ALL ABOUT JAZZ
September 1, 2009
Sign in to view read count 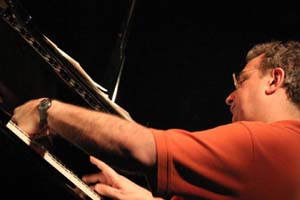 slideshow
Stanford Lively Arts opens its 2009-10 season with the West Coast premiere of Uri Caine's “The Othello Syndrome" on Saturday, October 10 at 8:00 p.m. at Dinkelspiel Auditorium. Following up on his “Mahler Remix;" (presented by Lively Arts in 2008), the iconoclastic composer/jazz pianist returns with a hand-picked ensemble of A-list collaborators for this radical re-imagining of the classic Verdi opera and Shakespeare play.

“The Othello Syndrome" dates from 2003, when Caine was commissioned to write a piece for the Venice Biennale for Music. “It came from a confluence of things," says Caine. “I had always loved Verdi's late operas, so I just put it all together by thinking about what would happen if “Otello" were played by an R&B singer from Philadelphia and how that would change the music. It's not really an opera at all--it's more about taking different parts of Verdi's “Otello" and transforming them, changing the style."

The resulting piece received its premiere in 2003 at the Biennale and was recorded over a three-year period. Released in 2008 on the Winter & Winter label, The Othello Syndrome earned Caine a 2009 Grammy Award nomination for “Best Classical Crossover Album."

Stanford Lively Arts' presentation of “The Othello Syndrome" will feature Uri Caine on piano and keyboards. The R&B vocalist Bunny Sigler and Swedish jazz muse Josefine Lindstrand will portray Otello and Desdemona, backed by a band that includes Ralph Alessi on trumpet, Zach Danziger on drums, Tim Lefebvre on bass, Chris Speed on clarinet and guitar, and Josefina Vergara on violin.

ABOUT THE ARTIST
Called “ferociously versatile" and “a genuine polyglot" (New York Times), Uri Caine has received commissions from the Vienna Volksoper, the Seattle Chamber Players, Relache, the Beaux Arts Trio, the Basel Chamber Orchestra, Concerto Kln, and American Composers Orchestra. He was the director of the Venice Biennale for Music in September 2003, where he also premiered “The Othello Syndrome." In 2006 he was named composer-in-residence for the Los Angeles Chamber Orchestra, premiering his Concerto for Two Pianos and Chamber Orchestra with Jeffrey Kahane in May 2006. Since moving to New York City, the Philadelphia native has recorded 19 CDs, the most recent being The Othello Syndrome (Winter and Winter label, 2008).

TICKETS
Tickets for “The Othello Syndrome," performed by The Uri Caine Ensemble, on Saturday, October 10 at 8:00 p.m. at Dinkelspiel Auditorium, range from $34 to $38 for adults and are $10 for Stanford students. Half-price tickets are available for young people age 18 and under, and discounts are available for groups and non-Stanford students. For tickets and more information, call 650-725-ARTS (2787), or visit http://livelyarts.stanford.edu/.

VENUE INFORMATION
Dinkelspiel Auditorium is located on the Stanford University campus at 471 Lagunita Drive, adjacent to Tresidder Union. Parking on campus is free of charge after 4:00 p.m. and on weekends at all times and may be found in the lot off Lagunita Drive near Tresidder Memorial Union and on Abbott Way. Maps and directions maybe accessed at http://livelyarts.stanford.edu.

ABOUT STANFORD LIVELY ARTS
Stanford Lively Arts curates experiences that engage artists’ and audiences’ imagination, creativity, and sense of adventure. Founded in 1969 at Stanford University, we produce and present music, theater, dance, spoken word, and multi-media events. We place a special focus on innovation and risk-taking, and through commissions and premieres are an incubator and destination for new work. Stanford Lively Arts plays a leading and collaborative role in the university’s thriving vision of a sustained culture of creativity—one in which the arts integrate with the academic disciplines, flourish as a vital part of campus and community life, and inspire new perspectives on our lives and culture.