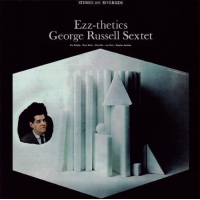 slideshow
When the 1960s jazz avant-garde was cranking up, George Russell (1923-2009) set an example, as was his way. It had been more than two decades since the intrepid composer captured the attention of the jazz world with his 1947 “Cubano Be-Cubano Bop” for the Dizzy Gillespie big band. He had gone on to compose and arrange for leaders as varied and influential as Artie Shaw, Buddy DeFranco and Lee Konitz. Russell’s Lydian Chromatic Concept of Tonal Organization became an influence among serious composers and arrangers. He went on to teach in Scandinavia and, later, at the New England Conservatory. Russell’s 1961 album Ezz-thetics featured another inspirational jazz educator, Dave Baker, on trombone, Russell playing piano, and two daring soloists in trumpeter Don Ellis and alto saxophonist Eric Dolphy. Russell’s blues “Honesty” is a highlight in an album whose release was a major event as the music consolidated stylistic changes and turned the corner into a new decade.