SOURCE: ALL ABOUT JAZZ
September 9, 2008
Sign in to view read count 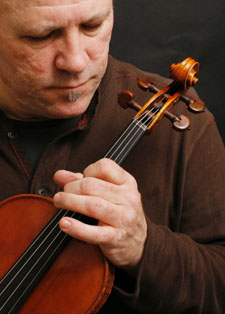 Ettinger’s third CD as leader, Inquatica will be released October 14, 2008 on Ettinger Music, available through CDBaby.com, IndieJazz.com and for download on iTunes.com.

“This is music that is attempting to tell a story within each piece, and as a collection of pieces,” says Ettinger. “A lot of this is pretty quiet and slow. Much of it is unjazz-like, although 99 percent of it is improvised. It was inspired in part by film composer Gustavo Santaolalla’s work on Alejandro Gonzlez Iñrritu’s films like 21 Grams and Babel. This recording is also inspired by the nonlinear narrative of those films.”

With these compositional concepts and with “an unbridled violin loop project in the back of my mind,” Ettinger sought a co-conspirator. He’s known Forbes since they were both fresh out of high school in Arizona. “Although we normally work in completely different idioms, at least as far as our solo stuff is concerned, we get along personally and musically and enjoy working together. I played on Pete’s first album, we've been in a couple live bands, and we keep in touch and watch for opportunities to work together,” Ettinger says. “I mailed Pete recordings of some improvised loops I was exploring, thinking he might find use for them somewhere in his work. He mailed me back the finished track that we ended up calling “Something Like Hope” which turned out to be the recording's most dense and intense track. I loved it. The primary curiosity and motivation for this project for me then became: What would Pete—a favorite musician of mine and a person who I wholly trust— and I sound like making a recording like this?”

Inquatica comes off as a tour de force of sound sculpting where Ettinger and Forbes develop loops of material that function as departure points, main themes, counterpoint, drones, sound collages, and all points between. There are completely acoustic tracks as well, with no looping at all. The music is tumultuous in some pockets, grooved, lyrical and rocking in others.

While the loops are all generated from Ettinger's violin, deciding on other instrumentation required some forethought as both musicians have some facility on more than one instrument. “Although this is primarily a violin and drums duet project, we talked beforehand about adding some other instruments in there too. We came up with two rules: no guitars, and no synthesizers. In the course of that discussion Pete mentioned that he'd recently purchased a banjo. Just the idea of him BUYING a banjo surprised me, so we agreed we had to use it.” It made its way onto two tunes, the sparse “A Place to Be From” and the gently eerie “Shipbreaking #9.” In addition to drums and banjo, Forbes also plays percussion and piano on three tunes. Ettinger plays acoustic violin, violin-induced loops, bass on one track, acoustic piano on two pieces and adds electric piano into two others.

While on his last release, Kissinger in Space, Ettinger opted to scale back on the loop- making he premiered in August Rain so that he could focus more on his violin playing, on Inquatica he deliberately set out to make full use of loops. “One usual method for me, a fairly common one I'm sure, is to record anywhere from three to 20 seconds into a looping pedal, build it up till it seems musically strong enough to bear repetition,” he explains. “Then, while recording that I manipulate in real time via knobs on my looping pedal—in this case a Maneco eko-filter made by a guy from Uruguay to operate like a old EH 16- second delay that Bill Frisell, Nels Cline and others have used for years—adjusting such things as register, speed, forwards, backwards, opening and closing filters. The actual recording can start after I get something I like, or right from beginning of the construction of the loop. This is all just driven by my ears. I try to learn the pedal as well as I can so I can use it musically. Then, the other instruments interact with that. It's much faster and way more intuitive than it might sound. I kind of enjoy the gadgetry, but it's really just a tool to make music with. Of course there's a lot of music out there using these tools, whether it's pedals, computers or samplers. Mine is a very idiosyncratic approach. I'm not as interested as doing something 'new' here as I am in doing something very personal that I believe in.”

“I hear these loops rhythmically as well as texturally,” he continues. “I'm obviously not after the perfectly quantized one-man-band approach. I love the trance-y quality, but I love the resulting asymetrical cross rhythm layered thing too--that's a big factor. Especially on a track like “Something Like Hope” from this new one or “April Was On A Sunday” from August Rain. What sounds like a background texture is full of rhythmic content to be reacted to and played with. The loops sort of become like another player or section to be interacted with, so they have their influence on the playing style of all the other stuff we played. We really tried to climb into the vibe of each track, sustain it and explore it.

In that process of interaction with the loops, Ettinger and Forbes overdubbed improvised responses. “Most of the overdubs were done with minimum discussion and first takes were honored,” says Ettinger, noting that “these loops/textures/rhythms were not conceived as static background material. They were thought of as equal with any other part, particularly on tracks like “Dancing With The Other Side” and “Inquatica” where the loop is very much like another player, moving and changing as we go through the track.”

As for the CD’s title, Ettinger decided to name it after the track “Inquatica,” a gem of a piece that got its title from his 4-year-old daughter’s made-up word. She told him, “Inquatica means when two things like people or animals don’t speak the same words but can still talk to each other. They’re inquatical.”

Ettinger says that seems to sum up the collaboration he and Forbes experienced. “This was different from anything that we had ever done before in either of our musical worlds,” he says. “Pete is a guy who is a meticulous songwriter and meticulous producer of his own material. He's well-read and a well-listened musician and he's a flexible and fast thinker. And he's got a deeply felt, complex sense of rhythm. He did an amazing job of finding and inhabiting his space in this music, which was a quite a departure from his recent work. And he applied all his engineering and producing experience to this music which created a tremendously comfortable vibe. And that led to a real free feeling for me, particularly on, oddly enough, all the acoustic violin playing here. This recording has become a favorite of mine. There's a lot of music in there!”