SOURCE: JAZZWAX BY MARC MYERS
May 2, 2011
Sign in to view read count 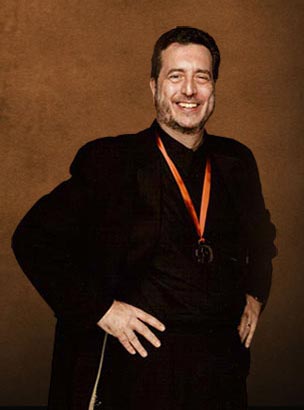 It's rare when classical and jazz merge perfectly. Most efforts tend to be ponderous and bombastic, particularly because most composers and arrangers forget that for such hybrids to win over American ears, the fusion needs to be an equal partnership with a dose of cinematic drama. Too often, jazz-classical efforts have been more classical than jazz, and quite often wind up taxing the patience of the American jazz listener. But there are glorious exceptions. One of these is the newly released Alborada, featuring pianists Carlos Franzetti and his wife Allison Brewster Franzetti.

To call this music Third Stream really misses the point. When I think of Third Stream, I think of music from the late '50s that features jazz musicians working way too hard to prove they went to a fine music school. Compositions from the era often sound heavily rendered and anchorless, like works meant to impress modern Europeans than a marriage of two parts. As a result, Third Stream sounds dated today, precisely because it lacks the heart, tenderness and whimsy that jazz provides.

Composer, arranger and pianist Carlos Franzetti was born in Argentina, so dark drama and bright surprise come easy to him. He moved to the U.S. in 1974 and has worked here steadily ever since. His wife, pianist Allison Brewster Franzetti [pictured], joins him on this album, playing on alternating tracks. Like Franzetti, she has a firm, lilting touch that grasps the regal qualities of classical without loosing sight of jazz's soul.

If Carlos Franzetti's name rings a bell, it's probably from Duets, the robustly seductive album he recorded with bassist Eddie Gomez that won a Latin Grammy in 2009. Franzetti's new album, like Duets, has elan and poise reminiscent of Michel Legrand.

I must tell you, I can't recall the last time I enjoyed a jazz-classical album this much. There's a special tension here and a suspenseful edge that makes this effort much more than mere movie music—though it could easily have been a score to an exceptional film. The music soars, pauses, lets your ear catch up, soothes, pulsates and at times shows its fangs. And throughout, there's a civilized restlessness that uses orchestration to frame the improvised spirit, not the other way around.

I can throw around the influences here and mention why Franzetti composed this song or that one. But much of it would be meaningless in this space. Not because the names would be foreign to you or that reference points aren't important. It's just that an album like this one simply must be heard in its entirety, from start to finish, to be completely understood.

The European and South American classical forms are romantic and folk in nature (Ravel and Bartok come to mind), but they never have the audacity to enslave the jazz spirit, which runs wild and barefoot here in an almost taunting manner.

Trust me, this is an album that is going to win you over almost immediately. It's gorgeous music without an agenda. And by clocking in at about 42 minutes, it never overstays its welcome. It's pretty and sexy at every turn.

JazzWax clip: Unfortunatley, there are no clips from Alborada on YouTube. But to give you a sense of Carlos Franzetti's gifted lyricism, here he is with bassist Eddie Gomez on Flowers, from Duets, a Latin Grammy-winner in 2009...