SOURCE: SOMETHING ELSE!
April 8, 2011
Sign in to view read count 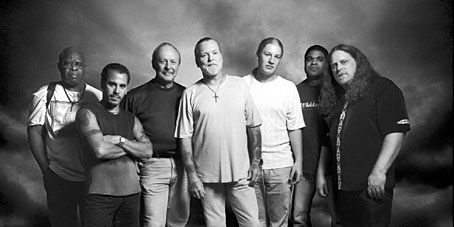 To be perfectly honest, I didn't pick up One Way Out because I'm a huge fan of the Allman Brothers Band. As with 2003's Hittin' The Note, I grabbed it because of the presence of slide-guitar monster Derek Trucks (pictured above) and the equally monstrous bassist Oteil Burbridge.

The Allmans are one of those bands whose music has infiltrated the musical landscape. It was pretty easy to ignore it when I was younger. It was just southern rock, and all I could see was a bunch of drugged out hippies sittin' round jamming on the front porch complete with that big guy in the overalls hunched over and blowin' into a jug. Of course, the generalization is wildly inaccurate. On the surface the Allman Brothers Band may invoke jaded images like that, but upon closer inspection this is music more closely related to the blues and even jazz at times than rock.

How many times have you heard Gregg Allman's “Midnight Rider"? I know I heard it so often I thought I'd never want to hear it again. And yet somehow the version on One Way Out is so invigorating it's like a new song. Truck's slide work howls from your left speakers and more often than not I found myself transfixed by his playing. Burbridge's bass work rarely takes center stage, instead burbling insistently in the background and providing a thick, meaty foundation. While the older material may not be the most challenging for such a tremendously talented bassist, every note and lick oozes with evidence of his proficiency.

The tendency for bands like this&#151bands that are known for their jamming—is to just rely on jamming, period. This has always been my problem, I find that most of the bands who jam simply lack the chops and taste to maintain my interest for long as they fall back on repetition and simple variations of riffs. The Allman Brothers Band perfected the art of jamming long ago, and One Way Out doesn't lack for it. Numerous tracks venture past the 10 minute mark, but don't drag on so long that you forget what song you're even listening to. Along with the Brothers' hallmark jam, “Whipping Post," the band stretches out on newer tracks like Hittin' The Note's “Instrumental Illness" (16 minutes of it!) and “Desdemona," but it's the jazzy change-ups of “Woman Across The River" that fascinates me no end. I can't get enough of the band slipping from up-tempo to down-tempo blues during the chorus, and then turning it right back around with a catchy little motif that's repeated throughout the tune. I could have listened to a lot more of this than the just under seven minutes provided on One Way Out.