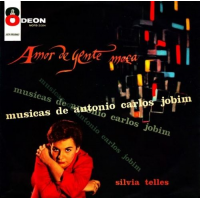 Sylvia Telles is my favorite female bossa nova vocalist. In 1961 she was the first Brazilian bossa nova artist to record songs in both English and Portuguese, setting a high bar for bossa nova singers who followed. Telles was on the rise when she was killed in an auto accident in Brazil in December 1966. Signed to Kapp Records that year, she had released The Face I Love in October and was about to begin a U.S. promotion tour. Her album Sylvia Telles Sings the Wonderful Songs of Antônio Carlos Jobim (Kapp), her second tribute to the bossa nova composer, was released posthumously.

Telles began recording in 1955 at age 21, and over the next 11 years she recorded 9 albums and 18 singles. Known by friends as “Dindi" (pronounced “Gin-Gin" in Portuguese), Telles was pals with Antonio Carlos Jobim, who wrote Dindi for her in 1959. [Photo above of Sylvia Telles and husband Candinho at Rio's Copacabana Beach in 1955]

Telles's life was a series of extreme highs and lows. In 1954, a family friend introduced her to composer-guitarist Garoto, who brought her together with João Gilberto. The two began a relationship that was cut short after Telles's father told her he thought the unemployed Gilberto was unsuitable for her. The following year she married Brazilian guitarist Candinho and two years later recorded her first album—Caricia.

In the late 1950s, as the bossa nova grew popular internationally, Telles came under the influence of Aloysio de Oliveira, a leading bossa nova producer in Brazil. In 1961, Aloysio began to manage Telles's career and arranged her first trip to the U.S., where she recorded Silvia Telles USA. Working closely with Oliveira led Telles and Oliveira to strike up a relationship, and Telles divorced Candinho in 1963 to marry him. But the two were mismatched, and slights led to fights and fits of jealousy, with Telles setting fire to her dressing room following a row with Oliveira. In 1964, the two separated.

By 1964, the bossa nova was no longer a novelty but a much-in-demand form. Following the release of Getz/Gilberto in March, record labels worldwide were scrambling for bossa nova artists. That year, Telles was part of the O Remédio é Bossa concert at the Paramount Theater in São Paulo, an event that featured star performers from Brazil and the U.S. Shortly after her performance and glowing reviews, Telles had a car accident that required repeated hospitalization.

By 1966, Telles had recovered sufficiently to perform on stage, and she toured Europe with Edu Lobo, a celebrated bossa nova singer-guitarist. After her last performance with Lobo in Germany, Telles flew back to Rio and soon became romantically involved with Horacio de Carvalho, a wealthy newspaper owner. On December 19, 1966, de Carvalho and Telles were driving on a freeway near Rio when Carvalho reportedly fell asleep at the wheel, resulting in a crash that killed both passengers. Telles was 32 years old.

Telles had a sensual voice that sounded as if she were pleading with someone to stay. She also could sing in a confidential way and soar effortlessly with power, bending notes around melodies in a way that melts hearts. All of her albums are exceptional and one can't help but wonder if her career might have been different if her relationship with Gilberto had worked out.

JazzWax tracks: A solid introduction to Sylvia Telles's recordings is Pure Bossa Nova: Sylvia Telles, a Verve compilation that you'll find here. But I warn you, one listen and you'll become a completist like me. Here's a list of Telles's albums...

JazzWax clip: Get ready to fall in love with Sylvia Telles's voice and charm. Here she is in Germany just weeks before her death, singing Samba Torto and One Note Samba...