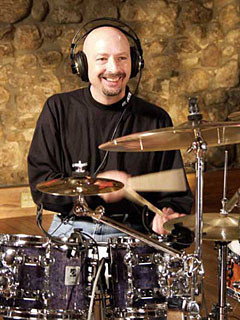 slideshow
LIVE! One Great Night - a CD + DVD set to be released May 29, 2012 on the BFM Jazz label - captures Vital Information in their natural habitat: A packed club with an audience of music lovers and the band in high gear, pulling out all the stops for the entire set. The all-star lineup of keyboardist Tom Coster (Santana/Gabor Szabo), bassist Baron Browne (Jean-Luc Ponty/Billy Cobham), guitarist Vinny Valentino (Bill Evans/Jimmy McGriff) and drummer Steve Smith (Journey/Hiromi /Steps Ahead) serve up a veritable banquet of sounds, from slamming funk and syncopated second-line grooves to seriously swinging, up-tempo B-3 burners, South Indian inspired jams and sizzling fuzoid romps. Steve Smith has this to say about Vital Information's philosophy, “Our music allows for individual expression and re-invention. We thrive on swing, groove, and creativity. We want to surprise each other every night on the bandstand with new ideas and in the process keep our audience 'in the moment' with us."

Now approaching their 30th year of touring and recording since their initial 1983 release, Steve Smith and Vital Information has become a formidable jazz/fusion juggernaut. Over the past 30 years, some of the extraordinary musicians that have toured and recorded with Vital Information include Mike Stern, Dean Brown, Tim Landers, Kai Eckhardt, Larry Grenadier, Jeff Andrews, and Frank Gambale. The group's founder and drummer, Steve Smith, has a history that stretches from Journey and Steps Ahead to The Buddy Rich Big Band, Ahmad Jamal, Zakir Hussain, and Hiromi. Steve has recently been voted 2012's #1 Fusion Drummer in Modern Drummer Magazine. Over the years Smith has won a number of Modern Drummer reader's polls including #1 All-Around Drummer - five years in a row - in 2001 he was named one of the Top 25 Drummers of All Time, and in 2002 he was voted into the Modern Drummer Hall of Fame. From 2008-2010 Drum! Magazine readers have voted Steve #1 Jazz Drummer. His Hudson Music DVDs Steve Smith - Drum set Technique/History of the U.S. Beat and Drum Legacy - Standing On The Shoulders Of Giants are best sellers in the music educational market.

Smith is quick to point out that a key to the band's remarkable versatility is its bassist. “Baron Browne brought a real serious groove element to the band," says Smith of his rhythm section partner since 1998. “He's my favorite bassist to play with because he can play all styles and he always makes the music feel so good." Browne has worked in the past with Gary Burton, Billy Cobham, Jean-Luc Ponty, Steps Ahead, and Tom Jones.

The distinctive multi-keyboardist Tom Coster, whose versatility ranges from Hammond B3 to accordion, was playing with Gabor Szabo and Rahsaan Roland Kirk before he came to prominence in Santana, a stay that lasted nine years. Coster composed and co-composed many of Santana's most popular tunes including “Europa", “Dance Sister Dance", and “Carnaval". Tom has recorded many solo albums under his own name and has been a member of Vital Information since 1986.

Vinny Valentino has been touring and recording with Vital Information since 2006 and is a recording artist and educator. At age 16, influenced by the music of George Benson, Vinny began pursuing jazz as a career. He recalls, “The turning point for me was hearing George Benson in concert; it was an eye-opening experience." Vinny and his mentor George have since developed a close friendship. George Benson refers to Vinny as a “young genius with brilliant tone and fresh ideas."

There isn't a more flexible and disciplined band of killer players on the jazz scene today than Vital Information.