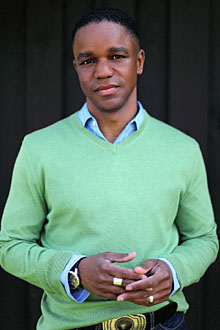 slideshow
Concord Jazz today announced the release of vibraphonist-composer Stefon Harris’s 7th album as a bandleader and Concord debut, Urbanus. The new release picks up where 2004’s Evolution left off in that it features Blackout, his scintillating ensemble that’s as versed in modern jazz as it is with rhythms, melodies and soundscapes associated with R&B, pop, hip-hop and funk. The 10-track-album will be available August 25, 2009.

The GRAMMY-nominated musician has been hailed as “one of the most important young artists in jazz” (Los Angeles Times), and is widely recognized by both peers and critics alike for his innovative compositions, blazing new paths on the vibraphone and marimba. On Urbanus, Stefon Harris and Blackout display a deeper group rapport as well as a more expansive sonic palette as Marc Cary complements the acoustic piano with Fender Rhodes and alto saxophonist Casey Benjamin lends his captivating vocoder work to the proceeding. Harris’ brilliance at broadening textures and colors comes to play with his sensational woodwind and string arrangements on a few of the compositions as well.

“One of the biggest indicators of our growth as a band is the level of contribution from all the members of the ensemble,” Harris enthuses. “The music not only incorporates all of our writing but everyone’s cultural backgrounds as well.”

To illustrate this point, he points to the disc’s opening track, “Gone,” which bounces to the pulsating polyrhythm of go-go, a sound indicative to Washington, D.C.’s urban landscape. Both bassist Ben Williams and Cary hail from Washington, D.C. It doesn’t hurt also that Harris is a big go-go fan. “How can you not like go-go? It’s so funky,” Harris says. Blackout is rounded out by longtime Harris drummer, Terreon Gully.

The delicate “For You” provides the perfect example of how Blackout balances the worlds of the acoustic with the electric co-written by Benjamin and Sameer Gupta. Before Harris recorded it, “For You” was a favorite on Benjamin’s Myspace page and has since undergone several incarnations. Harris first heard the tune when the band was rehearsing in San Francisco. Cary had just recorded the song for another date and shared it with the band. “We checked it out then decided to play the tune,” Harris recalls. “That evening we went over it and actually played “For You” in the concert. It was a perfect vehicle for the chemistry in our band. Casey later added a bridge and we continued to expand on the composition.”

The album also includes a fantastic makeover of Stevie Wonder’s early-’70s song “They Won’t Go (When I Go)” from Wonder’s 1974 LP, Fullfillingness’ First Finale. Urbanus closes with the spellbinding ballad “Langston’s Lullaby,” which is dedicated to Harris’ newborn infant, Langston.

Recorded just a few days before the historic presidential inauguration of Barack Obama, Urbanus sparkles with optimism, ingenuity and emotional immediacy. “How could it not?” Harris says when asked if the anticipating for the inauguration had an impact on the sessions. “Being in the studio, knowing that we were getting ready for the inauguration of the first African-American president--how could that not change my life? I was extremely inspired and that created a great feeling of audacity and some fantastic energy.”

Stefon Harris and Blackout will be on tour this Fall to promote Urbanus.