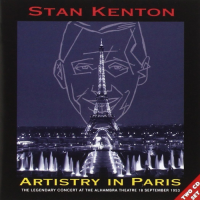 slideshow
From late August to late September of 1953, Stan Kenton embarked on one of the great European tours of his career. His hard-charging New Concepts band—formed in 1952 to feature a brassy, swinging wall of sound that showcased the personalities of individual soloists—was electrifying. The musicianship of each chair in the band was hair-raising when combined with gutsy arrangements.

The band made stops in nine countries, including Sweden, Germany, Switzerland, the Netherlands, Ireland and France (Paris). Britain was excluded because the musicians' union there banned performances by overseas artists in an effort to ensure steady employment for British musicians.

As you can hear on Artistry in Paris, a recording that documents the band's performance there on Sept. 18, the reception was thunderous, which was surprising. Parisian fans tended to favor older, more melancholy jazz. But the modern, savage attacks by Kenton's band and the aggression of individual soloists brought wild cheers, much to Kenton's surprise. He just assumed Paris would be the trip's toughest sell. But if ever a band's sound reflected America's upbeat, can-do personality at a moment in time, it was this one. Duke Ellington's and Glenn Miller's orchestras in the 1940s captured the country's poetic wistfulness, and Count Basie's orchestra in the late 1950s and early '60s would reflect the country's chrome-dipped finger-snapping self-assuredness.

In 1953, the Kenton band's wide-bodied blasts and sizzle captured Southern California's suburban spaciousness and cool. The band's sunny daring was evident in Conte Candoli's trumpet solos on Round Robin and Portrait of a Count, Lee Konitz's dry alto solo on In Lighter Vein and Frank Rosolino's fleshy trombone solo on Frank Speaking. You can hear the crowd's reaction to the energy and smarts at the close of each song.

Kenton's band in 1953 wasn't an orchestra as much as it was a gallery of individualists. Kenton wanted it this way, and he took great pride in showing them off and introducing bandmembers. Up until this New Concepts orchestra, most bandleaders barely acknowledged the singular contributions of its many musicians. If they did, the announced pat on the back was delivered almost grudgingly. Kenton couldn't wait to announce each member. As this recording shows, Parisians were only too eager to show their appreciation for America's art and service just eight years after the Continent's liberation.