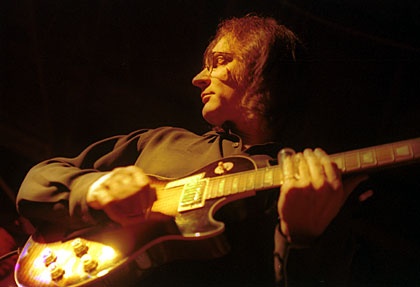 slideshow
Louisiana-based singer/songwriter/slide-guitar monster Sonny Landreth will release his ninth album, titled From The Reach and his first on his own Landfall Records label (distributed by Ryko Distribution), on May 20. On it, Landreth does something unprecedented in his body of work as he collaborates with five of the greatest guitar players on the planet -- Eric Clapton, Mark Knopfler, Robben Ford, Eric Johnson and Vince Gill -- in some jaw-dropping performances. Also making appearances are the legendary New Orleans pianist and singer Dr. John and Margaritaville's iconic troubadour Jimmy Buffett.

“I've been wanting to make this kind of record for a long time --- to do an entire album that would feature some of my favorite players as special guests," says Landreth. “The other thing was how to do it without being yet another clichd 'duets' album. Then I got the idea to write the songs specifically for each of the artists and that was the real hook for me, as a writer as well as a guitar player."

On the opener, “Blue Tarp Blues,' Sonny exchanges solos with Knopfler, and the aural contrast between Sonny's shimmering slide and the Dire Straits leader's biting Strat is a textural treat. Clapton appears to cut loose on “When I Still had You," adding his soulful voice to the choruses as well. Slowhand then wails on “Storm of Worry," a spooky slow blues reminiscent of his Bluesbreakers era.

“The Milky Way Home" is a powerful instrumental rocker that features Eric Johnson on delectably distorted guitar passages that morph into his trademark cello-like sound. “The Goin' On" shifts into a country-rock groove, with Vince Gill and Sonny alternating between guitar solos and lead vocals. Robben Ford brings his extraordinary tone and phrasing to “Way Past Long" and “Blue Angel" (the latter with Gill on backing vocals), as Landreth swaps his trusty Strat for a Les Paul. Each of these performances is an extraordinary showcase of brilliant players reacting to each other in supremely inspired fashion.

In one of two delightful changes of pace to the album's six-string focus, Dr. John brings the requisite gris-gris to “Howlin' Moon" with his trademark rollicking piano and harmonies, and he's joined on the track by Jimmy Buffett. “Although the idea of the record was playing with my guitar heroes, I wanted to open to the unexpected as well," Landreth explains. “I'd written 'Howlin' Moon' a long time ago and I'd always had Dr. John in mind for it. Then we took it a step further with Jimmy's vocal and the vibe was perfect."

As for the intriguing album title, “I thought about it a lot," he says. “One of the most interesting things to me in the songwriting process is letting it cook and bubble and see what comes up to the top. As I was writing these songs, the word 'reach' kept coming up and 'reach' is a pretty powerful word. Aside from the obvious meaning, it can refer to a body of water. And the water imagery kept coming throughout the writing of these songs as well, so it's like this is what came up out of this whole project for me. What would happen if I invited all these people: where would this take me. I literally reached out to them, and they graciously came on board. Then there was the impact locally of Katrina. So the title is the result of all of the above. It's coming from an honest place."

The same could be said of everything this one-of-a-kind artist has done in his single- minded career.