SOURCE: SHAMBHU VINEBERG
May 19, 2021
Sign in to view read count

One of the most attractive acoustic guitar singles I have heard for ages; please don’t miss out on this one, it's truly stunning.
—Steve Sheppard, OWM Radio 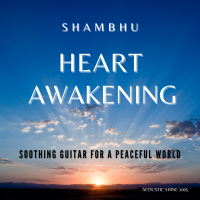 Reviewer Kathy Parsons (Mainly Piano) described “Infinite Eyes" as"stellar...soothing and relaxing yet has plenty of substance to sink your musical teeth into." Steve Sheppard (OWM Radio) called it “one of the most attractive acoustic guitar singles I have heard for ages; please don’t miss out on this one, it's truly stunning".

“Infinite Eyes” was composed by Sri Chinmoy and Shambhu, who plays acoustic and electric guitars, sitar and bass. “Sri Chinmoy reimagined the melody of a beautiful devotional Nazrul Songit by Anuradha Padwal and I adapted a part of Sri Chinmoy’s melody into Infinite Eyes,” said Shambhu.

Two musician-friends of Shambhu are also featured. Shambhu has played music with pianist Geoffrey Menin since their college days. Geoffrey has composed a number of scores for films and documentaries as well as music for dance.He has played with many prominent artists, including Buddy Miles, Stanley Jordan, Grover Washington, Jr., Paul Winter, Eugene Friesen, and Paul McCandless. Matteo Palmer's passion for acoustic fingerstyle guitar developed after seeing Alex de Grassi perform live, and he soon reached out to Grammy winning guitarist and producer Will Ackerman to pursue his music further. At the age of seventeen, he recorded his debut album Out of Nothing at Will’s Imaginary Road Studios. He has been recognized internationally for his guitar playing, and has been a featured performer at both the 11th annual Zone Music Reporter Awards Show in New Orleans, and the NAMM Convention in Anaheim. He invited Shambhu to play electric guitar on “Safe Haven” featured on his release, The Minstrel’s Return (2020).

“Infinite Eyes" was mixed and mastered by Todd Boston at Magic Cottage Studios (Portland, OR).

Shambhu transforms stillness and silence into calming sounds. He's an acclaimed jazz guitarist and composer who the Marin Independent Journal called “a consummate guitarist". His music has been recommended by Deepak Chopra on CNBC. Shambhu's relaxing music eases the busy minds of students, yogis, moms and workers. He worked with Grammy winning record producer Will Ackerman on his 2010 debut album, Sacred Love, which reached #1 on the ZMR (Zone Music Reporter) New Age music chart.

Shambhu's second album, Dreaming of Now, also produced with Ackerman, reached #2 and won Best Contemporary Instrumental Album at the ZMR Music Awards (2014). His third release, “Soothe,” saw two songs move into rotation on Sirius XM. His fourth release, “Lilac Skies,” featured the popular song “Pondering When” which All About Jazz called “fingerstyle pearls”. Reviewer Jakob Baekgaard describes Shambhu’s sound as “not world music, fusion, fingerstyle, new age or smooth jazz, but all these things in a personal expression.” Shambhu is featured on Whitney Houston’s Whitney, Jeff Oster's Next, Ricochet – The Echoes Living Room Concerts (Vol 20), two Will Ackerman compilations, The Gathering II,” and The Gathering I (ZMR Award for “Best Album of the Year"), The Guitar- The Best of New Age Reviews, Ann Licater's Doorway to a Dream,” and Matteo Palmer’s Safe Haven.