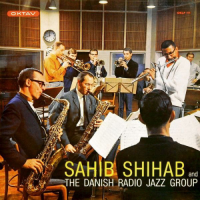 As a member of the Quincy Jones Big Band, saxophonist and flutist Sahib Shihab had a chance to travel extensively abroad. The band was in Paris for in 1959 and '60, where Sahib had an opportunity to experience Europe at length for the first time. He found Paris relaxed, racially tolerant, art-focused and beautiful during the day and late at night. I know, because Sahib told me this when I interviewed him at Rutgers University in the early 1980s, when he was a visiting professor there.

In 1961, the Jones band toured again in Europe, this time in Germany and Sweden. Rather than return to the U.S., Sahib joined the Europe-based Kenny Clarke-Francy Boland Big Band and remained with the orchestra for its 12-year run. Sahib had a chance to visit and play in Copenhagen in the fall of 1962. He fell in love with the city and moved there. In 1963, he joined the Danish Radio Jazz Group.

The ensemble, supported by the Danish government, was founded in October 1961 with 10 jazz musicians who were invited to perform on just one broadcast per month. Then in 1964, the DRJG was increased to 12 musicians and was able to play on the air more frequently, with guest soloists that included Sahib.

The album features Sahib's arrangements of his own compositions, and the DRJG takes to them like cats to milk. Wow, what a band playing remarkable songs and arrangements. Sahib's works constantly shift moods and tempos, making them mini suites. Sahib solos beautifully throughout on alto and baritone saxophones and flute, an instrument he pioneered in jazz.

“Di-Dad" was something of an inside joke over the sound of shortened, spike-y staccato notes throughout the song.

“Dance of the Fakowees" is a tribute to a Native-American tribe.

“Not Yet" is based on an ascending C-minor scale, according to the liner notes.

“Tenth Lament" is structured in three parts—a slow opening and end with an up-tempo middle.

“Mai Ding" is a song dedicated to the Japanese poet.

“No Time for Cries" is a ballad Sahib plays on the baritone saxophone.

“The Crosseyed Cat" was composed for this album. The others were composed by Sahib in earlier years.

“Little French Girl" didn't appear on the original album but surfaced on on the digital re-issue. My guess is it's from another session, since there are strings. It features Sahib singing, and his voice, song and lyrics are sublime.

Yesterday, I spent the afternoon listening to this album, and it kept growing on me. It also became a reminder to transcribe my Sahib interview. I remember our conversation being intense as he warmed up to me.