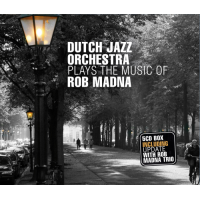 slideshow
For many JazzWax readers, this blog is a resource that happily turns them onto jazz musicians and recordings they didn't know previously. But every so often, that wow sensation happens to me. My own discovery happened a few weeks ago while posting about Joy Marshall (here and here). In the latter post, I featured a video of pianist Rob Madna playing solo on Yesterdays and then Marshall joining with the orchestra on It's Alright With Me. Madna was completely new to me, and I wasn't alone. I must have heard from a couple dozen readers who had never heard his name or his piano but wanted to know more. Among them was saxophonist Bill Kirchner, and believe me he knows a ton of jazz.

Madna was born in the Hague, the Netherlands, in 1931. Like Dutch trumpeter Rob Pronk, Madna was of Indonesian heritage. What's astonishing is that Madna was self-taught. A busy high-school math teacher dedicated to his students and academic position, Madna didn't tour outside of the Netherlands. As American musicians turned up abroad in increasing number and frequency in the 1950s and '60s with the proliferation of European jazz festivals, Madna turned down offers from Thad Jones, Freddie Hubbard and Lucky Thompson among others to play behind them in concert and on recording sessions. If the gig wasn't in Holland, it was a pass.

Growing up, Madna was a musical child who instantly picked up whatever was on the family turntable, from Teddy Wilson to Duke Ellington. Struck by the jazz bug early, Madna and his friends, the brothers Ack and Jerry van Rooijen, absorbed as much live jazz as possible. Both brothers would become famed Dutch jazz musicians. Once Madna began to play professionally in the early 1950s, he was deeply revered by fellow musicians in Holland, who listened to him in awe.

Madna's first recordings in January 1955 were two tracks for Jazz From Holland, a 10-inch Columbia compilation of Dutch jazz artists. Ten days later, he began recording several 10-inch albums of music, between '55 and '56, in a trio, quintet and 11-piece ensemble as part of the Dutch Philips Jazz Behind the Dikes series. He then recorded as a sideman in multiple groups, including the Rhythme All Stars and The Millers.

By the early 1960s, Madna was recording with American expatriates such as Don Byas and Dexter Gordon (In the Cave). In the 1970s, Madna recorded more frequently but disappeared on disc during most of the 1980s, returning in the 1990s with several important trio albums and a spectacular orchestra album that he arranged—Dutch Jazz Orchestra Plays the Music of Rob Madna, with Madna playing trumpet, flugelhorn, piano and synthesizer. In 2000, he recorded his last two albums, Live at Cafe Hopper and En Blanc Et Noir #6.

What made Madna spectacular were his ears. An enormous natural talent, he began as a bebop player akin to Bud Powell, but over time his attack evolved through a range of styles. This is unusual for even the best players and is an indication of his sharp ear and how he acclimated to jazz's shifts. Madna was also a sterling arranger, as evidenced on the Dutch Jazz Orchestra box set. Lovely, airy and sophisticated charts along the lines of Thad Jones and Gerald Wilson. But without any formal education in scoring.

Dear Bill, Madna is one of the well-kept secrets of European jazz, a phenomenal player with phenomenal time. Tremendously admired by his collegues and students, he always kept a low profile. Madna met Thad Jones when the Thad recorded in Hilversum with the Metropole Orchestra in the late-1960s or early-1970s.

As always, the best way to appreciate an unfamiliar artist is to hear him or her in action:

Here's the first track from the The Rob Madna Trio Featuring Ferdinand Povel. (1976), The rest of the album's tracks are at YouTube...

Here's Lush Life from Rob Madna, Solo Piano: Jazz at the Pinehill (2000). The rest of the album's tracks are at YouTube...

Here's Midsummer '84, the first track from Dutch Jazz Orchestra Plays the Music of Rob Madna in October 1994. The rest of the box's tracks are up at YouTube...

Bonus: Here's the Dutch Jazz Orchestra playing Rob Madna's composition and arrangement of Daydream, in 2008, featuring Simon Rigter on the tenor saxophone solo. A special thanks to Bill Kirchner for sending along the link...

And here's Madna's A Song for BE, written in tribute to Bill Evans...