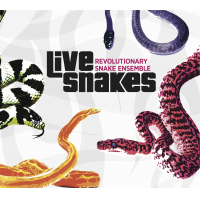 slideshow
Boston-based saxophonist/composer Ken Field has drawn deeply from the wellspring of the New Orleans brass band tradition since forming his Revolutionary Snake Ensemble in 1990. Using the boisterous rhythms of that tradition as a launching pad for unbridled improvisations on both original and traditional material, the band has emerged as a singular force in the music. Their third CD, Live Snakes, set for March 11 release by Accurate Records, captures their distinctive sound in all its expressive glory.

Recorded in 2011 and 2013 in Boston, Brooklyn, and Manhattan, Live Snakes documents four editions of the highly mutable ensemble, with two sonically inventive remixes by Field thrown in for good measure. Adding to the deep pool of Boston talent that has sustained the RSE for more than two decades, Live Snakes features an extended family of players, including New York masters Matt Darriau (tenor sax and flute), Josh Roseman (trombone), and Kenny Wollesen (drums and percussion), and New Orleans tenor saxophone great Charles Neville.

A good deal of Live Snakes’ emotional punch stems from the fact that Field’s wife, the renowned filmmaker and animator Karen Aqua who often collaborated with the RSE, lost her battle against cancer just one week after the album’s earliest session in 2011.

“The whole New Orleans concept of a jazz funeral, where it’s very somber and moving at the beginning and then you break into celebratory up-tempo grooves afterwards, really helped shape this album,” Field says. “After playing in churches and at Karen’s memorial it really brought home again that that’s the script for how music should be. You’re mourning and you’re celebrating. The music encompasses these really conflicting emotions, joy and sadness at the same time.”

The heart of Live Snakes is the aching dirge “For Karen,” a stunning group improvisation from the 2011 session at Brooklyn’s 58 Northsix Media Labs. The lamentation segues into a lugubrious rendition of the spiritual “I’ll Fly Away” recorded by a full eight-piece band two years later at Cambridge’s Regattabar, a performance that ends up-tempo as a high-stepping celebration. The entire album’s sequencing follows this kind of emotional logic, imbuing Live Snakes with the feel of a cathartic odyssey.

Marked by bawdy humor, seat-of-the-pants arrangements, and a love of unabashedly beautiful melodies, the band is equally effective interpreting hymns, like “Rock of Ages,” and jazz standards, such as “Caravan.” Field closes the album with an atmospheric remix of “Cassandra 4,” a tune originally commissioned by Bridgeman/Packer Dance, and a newly constructed piece “Breakdown Part One” that can best be described as Miles Runs the Voodoo Down to Basin Street. In a typically Fieldian move, he turns a live album into an opportunity for further investigation into form and texture.

“I’m a firm believer in experimentation: I don’t like doing the same thing twice or repeating what other people have done,” Field says. “But at the same time I like the idea of maintaining some continuity with what listeners expect, so when we’re rhythmically complex sometimes we’ll be harmonically simpler. I play a melodic instrument, so we’re always going to be focusing on melodically based music.”

The band’s acclaimed debut album, 2003’s Year of the Snake (Innova Recordings), brought national attention. The following year the RSE began playing at Mardi Gras and has regularly marched with the all-women Krewe of Muses, an experience that “legitimized the band to me,” Field says.

With its second album, 2008’s Forked Tongue (Cuneiform), the RSE continued to expand its already far-flung repertoire, ranging from hymns and spirituals to traditional New Orleans parade anthems and tunes by everyone from Billy Idol to Ornette Coleman.

In addition to his work with RSE, Field continues to perform and record with Birdsongs of Mesozoic, a new music/chamber rock ensemble that spun off from the storied band Mission of Burma. He also maintains a busy solo career as a player and composer with five solo releases, including Subterranea (O.O. Discs), Pictures of Motion (sFz), Tokyo in F (Sublingual), Under the Skin (Innova), and Sensorium: Music for Dance & Film (Innova). Field has written scores for animation, film, modern dance, and television, including music for Sesame Street.

Founded in 1990 as an improvisational horn and percussion group for a pagan women’s ritual celebration and evolving for more than 20 years to its present-day incarnation as costumed funk/street beat improvisational brass band, the Revolutionary Snake Ensemble has continued to captivate audiences. The RSE was nominated as Jazz Act of the Year in the New England Music Awards (winners to be announced Feb. 22) and will be marking the release of Live Snakes with a March 4 performance at the Regattabar in Cambridge, MA. Also scheduled is a March 22 appearance at Barbes in Brooklyn, as well as a return engagement at the Kennedy Center in Washington, DC on March 23.