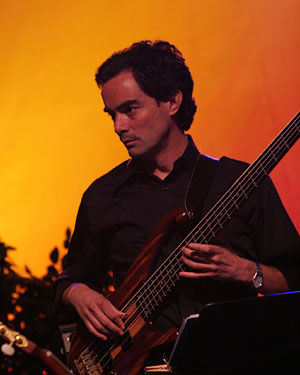 slideshow
Argentinian bassist and composer Fernando Huergo rereleases his successful album, Provinciano, on Blue Music Group, now featuring a new mix and master, made for iTunes. Featuring thirteen compositions, most of them from Huergo's creative pen, the album has been praised by the media - All About Jazz says “Huergo triumphantly morphs the best of several musical worlds into this dazzling masterwork", and All Music Guide: “Highly recommended!"

Fernando Huergo was born in Córdoba, Argentina, but has resided in Boston, Massachusetts for over twenty years. During his career, he has been featured on over one hundred albums, including a dozen as a leader.

As a developer of the Argentinian chacarera into the jazz tradition, Huergo has recorded three highly original albums on which he acts as composer, bandleader and bassist: Jazz Argentino, Live at Regattabar and now Provinciano. His band has featured saxophonists Chris Cheek and Andrew Rathbun, flutist Yulia Musayelyan, pianist Mika Pohjola and drummers Jeff Ballard and Franco Pinna.

Huergo is a Professor at Berklee College of Music since 1996, and a popular clinician.