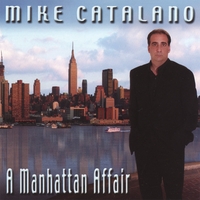 Catalano might be new to the contemporary jazz world, but his music has been heard by Millions of Americans, when he was composer for the nationally syndicated TV SHOW “A Current Affair" with Maury Povich and many other shows for Fox New York including the first theme music for GOOD DAY NEW YORK.

His long time dream of making a smooth jazz CD is finally a reality. As a follow up to his successful Brazilian release A Rio Affair which was only released in Brazil, he wanted to enter the smooth jazz world head first in his own town MANHATTAN! A Manhattan Affair.

Highlights of the A Manhattan Affair:

“I've watched Mike Catalano's career blossom from his days of Brazilian roots-music into the full-fledged jazz musician he is today. You can feel his inspiration as you listen to every nuance of his playing and writing. His music is sure to move anyone with heart & soul!" —WILL LEE, 2007, CO-PRODUCER

Mike Catalano will be available for all press related ventures, interviews, performances with piano or band, as needed, on request and performing in a town near you!