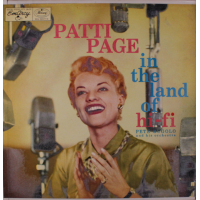 slideshow
On Monday and Tuesday, May 7 and 8, 1956, singer Patti Page was in Holloywood recording a jazz-pop album arranged by Pete Rugolo with a crowd of the finest jazz studio musicians in town. Produced by Bob Shad for EmArcy, Mercury Records' jazz subsidiary, Patti Page in the Land of Hi-Fi was most likely recorded in the ground-floor studios at the newly opened cylindrical Capitol Tower. Signed by Mercury in 1947, Page had 42 hits between 1948 and '54. In 1956 alone, she had 7 more and was host of TV's Patti Page Show, with Oldsmobile as the show's sole sponsor. On the album side, she was transitioning well into the 12-inch LP era.

For those unfamiliar with the term “hi-fi," it was short for high fidelity, a record-industry marketing term popular in the mid- 1950s letting the mass market know that the new 12-inch pop album had better sound than anything they had experienced previously. EmArcy made five albums in its “Land of Hi-Fi" series from late 1955 into '56, featuring Sarah Vaughan, Dinah Washington, Page, Georgie Auld and Cannonball Adderley.

Page was likely the initiator of her EmArcy session. Weary of syrupy songs like Go On with the Wedding and Mama From the Train, the jazz date gave her an opportuity to work with Rugolo and a cool-cat band with tremendous punch. What kind of punch are we talking about exactly?

Incredible lineups on both sessions, with Rugolo corralling the best West Coast jazz readers and a bunch of crack movie-studio session guys. Page handles Rugolo's tricky brass writing with ease and gives as good as she gets from the band's Mack truck sections. Interestingly, Page knew she not only had to sing with swing here but also had to dominate the orchestra, riding on top and not winding underneath it.

The careful listener will notice that each Rugolo arrangement is a challenging work of art, with all sorts of instruments coming and going and at odd places. Page, the seasoned pro, zig-zags through all of it without breaking into a sweat, leaving plenty of space for the orchestra to show off its stuff.

Of note, photos from the session on the back of the album show Page in oversized black Lucille Ball glass frames so she could read the music. There are mini solos throughout the album, including superb blowing by Bud Shank on I've Got My Eyes on You and a few bars by J.J. Johnson on Taking a Chance on Love. Where Page double-clutches is at the end of songs, where the band breathes fire and she has to hold a note. She does so with incredible feline finesse. As with Kay Starr's I Cry By Night (1961), it's a shame Page didn't record a bunch more like this one. But back then, pop paid the bills.

Patti Page died in 2013. JazzWax tracks: Patti Page in the Land of Hi-Fi has been released many times over the years in the U.S. and Japan, but Fresh Sound offers the best value, since it combines Hi-Fi with Page's The West Side, with West Coast jazz combos co-arranged by Rugolo and Bill Holman, Shorty Rogers and Marty Paich. You'll find the combined album here. You also can listen to Hi-Fi for free at Spotify. JazzWax clips: Here's Nevertheless. Listen to the complex instrumental road map on this one...

And here's Out of Nowhere...