SOURCE: SPIRIT OF NEW ORLEANS PRODUCTIONS
May 9, 2012
Sign in to view read count 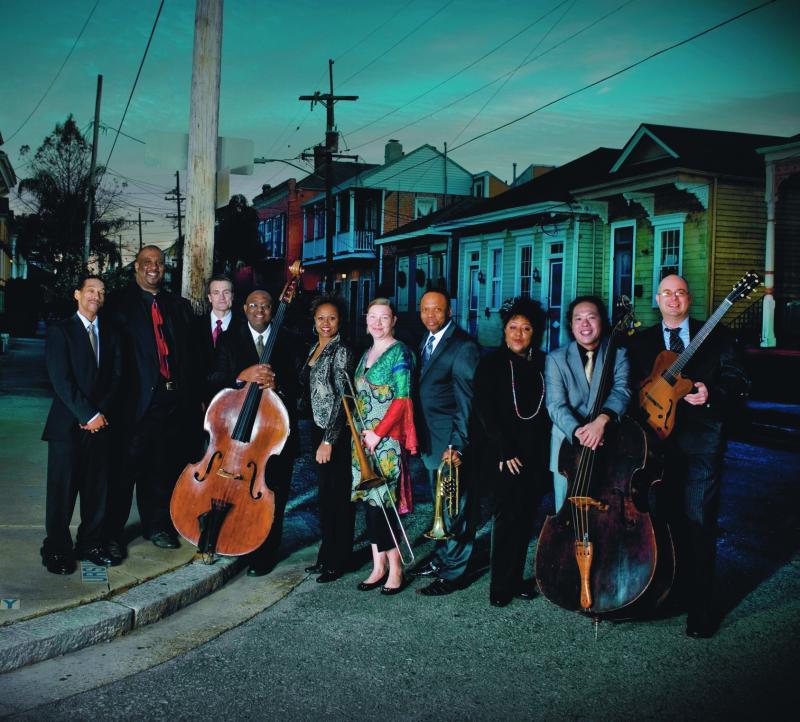 slideshow
It’s been eight years since their debut album At Last and now; another collaboration from this diverse ensemble once again ferrying jazz lovers to a better understanding of musical intimacy. Along with a fresh set of titles, the band’s lineup is also slightly augmented on this new, captivating recording. Finnish based drummer and co-founder of the group, Thomas Rönnholm, doesn’t appear amongst the personnel this time. But co-founder, bandleader, trombonist Katja Toivola is an irrefutable force along with vocalist Tricia Boutté. These three talented individuals came up with the idea of putting the group together when they were members of a Helsinki based band, back in 2001. Toivola and Rönnholm being natives of Helsinki and Boutté from New Orleans figured since they performed so often together throughout Finland that it might not be a bad idea to dub their latest venture the New Orleans Helsinki Connection.

The first track, Paradise On Earth, is an original composition from Katja that denotes a noble salute to the city of New Orleans, her current residence. It opens with an instrumental chorus followed by a soulful deliverance from Tricia, with brilliant 16 bar passages being traded between trumpet, trombone, piano and guitar, with an ensuing vocal out chorus. Clever lyrics, along with a catchy melody comfortably place this song amongst the great jazz standards. Within the quintet format, the band revs it up with an exuberant instrumental I Found A New Baby, Gerald getting to show off his chops during a nifty shout chorus that follows Mitch’s swinging bass solo. They bring back Todd’s stellar guitar work on track 3 for a superb rendition of Fidgety Feet, a traditional jazz classic. Both of these two previous tracks are strong, with delightful interplay between trumpet and trombone during the ensemble sections and all these musicians render unfeigned solos that stimulate desirable anticipation. Tricia returns with a sassy but humorous version of the standard There’ll Be Some Changes Made, with indelible solos from Paul and Leroy. Track 5 will place you in a pensive mood with Tricia’s peerless, evocative interpretation of Stardust. Along with Leroy’s silky smooth flugelhorn solo, Paul’s piano and Mitch’s bass accompaniment is incomparable. After You’ve Gone is offered new life with the Connection’s newfangled arrangement and Tricia exiting the set following four pristine performances.

The band reverts to the quintet format and a more traditional jazz genre with a jovial Oh! Didn’t He Ramble, rendering Leroy some vocal duties, with Katja and rhythm section consisting of guitar, introducing Nobu on bass and Jerry on the drums. Paul and Gerald are back on track 8 where they strike up a boppish cover of Way Down Yonder In New Orleans, with a couple of frolicsome vocal choruses from Leroy. The band stays within that traditional vein with their next selection, We'll Understand It Better By And By, which introduces the preeminent voice of Yolanda. Track 9 also brings Jerry back to the drum set. Bessie Smith would be flabbergasted at how Yolanda skillfully belts out one of her old signature pieces, Baby Won’t You Please Come Home, on track number 10. Accompanied by guitar, bass, drums and flugelhorn, before she exits, her vocal prowess simply blows you away with a breathtaking performance of My Funny Valentine. As this awesome set of music nears the end, the NOHConnection takes you down to Brazil with Caipirinha da Lapa, a new instrumental penned by Leroy to salute one of the band’s favorite destinations. Track number 13 gears up with an invigorating arrangement of High Society. Slick interplay once again between trumpet and trombone, rousing solos from all, with echoes of Alphonse Picou’s seminal clarinet solo. On the final track of 14 the band swings out and ends on a high note with a vivacious China Town.

“Listening to the New Orleans Helsinki Connection’s new CD Paradise On Earth brought me to a place or space that can undeniably be defined as paradise, even if only for an hour and some change. If you’re a NOHConnection fan, owning this musical treasure is a must. What a great set of music!" —Joseph Daniel

Special thanks go out to the Threadhead Records Foundation for their generous support!