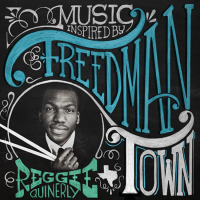 slideshow
On his forthcoming debut CD, jazz drummer/composer Reggie Quinerly taps a rich vein of cultural history from his native Houston to produce an ambitious, soulful, and uniquely resonant work—Music Inspired by Freedmantown. The disc will be released September 18 by Quinerly’s Redefinition Music label.

Although Quinerly attended grammar school in the heart of the historic African-American district once known as Freedmantown (now the Fourth Ward), he knew little of the significance of the area. But a melody he composed while in his second year at Juilliard opened the door to memories of his hometown and, soon, an obsession with learning everything he could about the neighborhood and its past.

“Over time I began to discover how this area became home to Houston’s largest population of African-American homeowners immediately following the Emancipation Proclamation,” says Quinerly, 31. “I learned how its history has played a significant role in the advancement of racial and economic equality, impacting the lives of all Texans from then on.”

The streets of Freedmantown, he says, “were becoming the backdrop for this project. I wanted to capture the very soulful essence of Freedmantown’s voice.”

With the exception of the standards “I’m Old Fashioned” and “Sentimental Journey” (the latter his mother’s favorite song), all of the songs on the CD were composed by Quinerly and most relate directly to Freedmantown. A world-class cast of players was on hand to help the leader breathe life into his evocative sound portraits: tenor saxophonist Tim Warfield, pianist Gerald Clayton, guitarist Mike Moreno (a classmate of the drummer’s at Houston’s High School for the Performing and Visual Arts), and bassist Vicente Archer.

Also featured, on two selections, are trumpeter Antoine Drye, tenor saxophonist Matt Parker, and trombonist Corey King, as well as vocalist Sarah Elizabeth Charles (on “Victoria”) and pianist/organist Enoch Smith Jr., who sings his own lyrics on the church-influenced track “Freedmantown” (The soul of this place / is written on every citizen’s face).

Reggie Quinerly started playing drums at age 8 after hearing Lester Grant playing at the church Quinerly attended with his family. “Many people, including myself, come to jazz through church, with the latter helping to shape the way we hear and play the former. In my mind, he was a jazz drummer first,” Quinerly says of Grant, with whom he studied for a year. “Much later I discovered he had been a top session drummer in the ’50s for many traveling blues and jazz acts, which explained why the way he played wasn’t necessarily from the gospel tradition. It wasn’t shoutin’ music. Sitting at his side, I developed my sensibility for hearing the drums a little bit differently. It was definitely more low-key.”

Quinerly subsequently studied with Sam Dinkins, who “knew how to play all the percussion instruments—not just drums, not just the drum set, but all of the world percussion. I was exposed to all kinds of music and all kinds of styles. He was also the consummate professional. Being a drummer, even a great one, was never enough. He stressed the importance of building businesses and creating opportunities for other artists to thrive. Those lessons have stayed with me.”

Quinerly is looking forward to bringing Music Inspired by Freedmantown to the stage. He will perform a CD release show at Smoke in New York City on 12/5, and a very special concert is planned for 12/29 at Houston’s African American Museum at The Gregory School. “I feel extremely privileged,” he says, “for the opportunity to present this music at The Gregory School, a special venue that celebrates the collective achievements of all people, past, present, and future.”