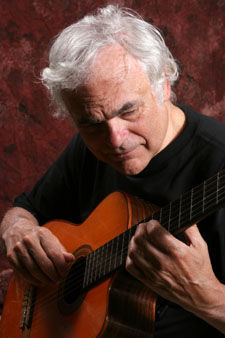 This November 11th, Motema Music, the Harlem based record label that is home to Rufus Reid, Marc Cary, Lynne Arriale and Roni Ben-Hur among other top jazz talent, will release the first in their new “Jazz Therapy" series of charitable fund raising CDs produced in association with the Jazz Foundation of America. Jazz Therapy, Volume 1: Smile, featuring master guitarists Gene Bertoncini and Roni Ben- Hur, will benefit the Dizzy Gillespie Memorial Fund at Englewood Hospital and Medical Center which, under the leadership of Dr. Frank Forte, has been responsible for providing millions of dollars of free care to jazz musicians.

A release celebration for Jazz Therapy, Volume 1: Smile will kick off at Dizzy’s Club Coca Cola-Jazz at Lincoln Center on November 3rd with two live sets at 7:30 and at 9:30. The concerts will feature Gene Bertoncini and Roni Ben-Hur performing selections from their duet CD, supported by Santi Debriano on bass and Rich DeRosa on drums. Dr. Frank Forte, a fine guitarist as well as one of the country’s top oncologists, will also sit in for one number.

The impetus for this new “Jazz Therapy" series came earlier this year from Ben-Hur and the late great jazz bassist Earl May, who once played with Ben-Hur regularly in the lobby of Englewood Hospital as part of a Jazz Foundation of America program. The two proposed to Motma founder Jana Herzen that they collaborate to release a benefit CD to repay the Englewood Hospital for its generosity to the Jazz community. Unfortunately May passed away suddenly in January 2008 before the disc could be recorded. At that point, Bertoncini generously stepped in to volunteer his talent as Ben-Hur's recording partner, resulting in the formation of what award-winning jazz critic Ira Gitler is now calling “an eminently special guitar duo.”

“The combination of two guitars is more than the sum of its parts,” writes Gitler in his liner notes for the project. “The chordal aspects are many; there are percussive possibilities; and, of course, the singing melodies of the single lines. When you factor in two such en rapport artists as Bertoncini and Ben-Hur the results are sublime.”

Bertoncini, known as the “Segovia" of jazz guitar, has a thriving solo career and has played on hundreds of recordings by such artists as Tony Bennett, Nancy Wilson, Benny Goodman and Hubert Laws. He contributes two original compositions to the CD, as well as offering intricate arrangements of popular songs such as “Killing Me Softly,” “Besame Mucho” and the title track, Charlie Chaplin’s “Smile.”

For Israeli born Ben-Hur, a first call NYC player known for his work with Barry Harris and for his singular Sephardic-tinged jazz style, Smile will be a second Motma release and his sixth overall as a leader. Ben-Hur brings his substantial ‘keeper of the be-bop flame’ guitar chops to bear for this release and provides his original compositions “Anna’s Dance” and “Sofia’s Butterfly,” named, incidentally after his two daughters.

Bertoncini describes the recording process; “It was like getting together with an old friend and talking about life. From the first time we played together it was instant conversation. ” Also key to the deeply peaceful vibe at the April 17 & 18 recording sessions was the quiet presence of engineer Dae Bennett, who not only donated his prodigious engineering chops to this project but also donated pro- bono recording time at his world class Bennett Studios in Englewood, NJ. “Just about my whole family was born or has died at that hospital, “said Bennett, who was glad to have this opportunity to donate his services to the cause.

“The Motema label, named after a central African word meaning heart, exclusively promotes master recording artists who care about making a positive difference in the world. “Our artists have that special ability to tune into their ‘heart essence’ when writing and playing, and as such create music with healing qualities, regardless of genre,” explains Jana Herzen, “Roni and Gene perfectly exemplify what I’m referring to. This music will be healing to anyone who listens to it, and for those of us who play guitar, it’s also a master course in guitar arrangement! Personally, I’m in awe of what they’ve created. These are extraordinarily generous musicians in every sense of the word.”

The Dizzy Gillespie Memorial Fund at the Englewood Medical Center was founded just after the late, great trumpet player Dizzy Gillespie passed in early 1993 from pancreatic cancer. According to his long time physician, Oncologist Frank Forte, MD, towards the end Dizzy said to him, 'I can't give you any money, but I can let you use my name. Promise you'll help musicians less fortunate than I am'.” And so, in late 1993, Englewood Hospital honored his request by establishing The Dizzy Gillespie Memorial Fund, which raises money to help underwrite the costs of hospitalization, diagnostic tests, and a full range of surgical and medical care for jazz musicians who are unable to pay. Today, a network of more than 50 physicians in a variety of specialties continues to provide free care to musicians who are referred by the Jazz Foundation of America’s intake program.

In the 15 years since Dizzy’s death, Englewood Hospital has cared for more than 1,000 musicians from all over the world and has provided more than $5 million in free medical care. The hospital’s