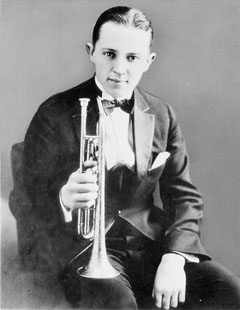 slideshow
For many aficionados of Bix Beiderbecke the surprise is not that there is so little film of the great cornetist, but that there is any. To the left, we see a frame of film shot in 1928 for Fox Movietone News of the Whiteman orchestra recording or rehearsing a piece called “My Ohio Home.” When Beiderbecke died in 1931 at the age of 28, he had earned the admiration of his contemporary and friend Louis Armstrong and become an inspiration for generations of cornetists and trumpet players. The official cause of his death was pneumonia, his lifestyle strongly suggests that advanced alcoholism was a contributing factor. Beiderbecke was a primary model for Rex Stewart, Jimmy McPartland, Benny Carter and Bobby Hackett, among dozens of others. The influence of his tone, lyricism and phrasing continued well into the new century in players including Warren Vache, Ed Polcer and Richard Sudhalter. Sudhalter was also Beiderbecke’s biographer.

The clip opens with Whiteman symbolically tearing up his RCA Victor contract as he was about to sign with Columbia Records. Beiderbecke is shown standing and playing beginning at 1:12. Erwig Films, which posted this on YouTube, shows us the clip twice.

So much for the novelty of a glimpse into history. For a complete and more satisfying Beiderbecke performance, let’s listen to Beiderbecke on cornet in “I’m Coming Virginia” from 1927. The tag ending with which Bix follows his glorious solo is one of the most quoted phrases in jazz.