SOURCE: STEFANO ZUCCHIATTI
May 26, 2015
Sign in to view read count 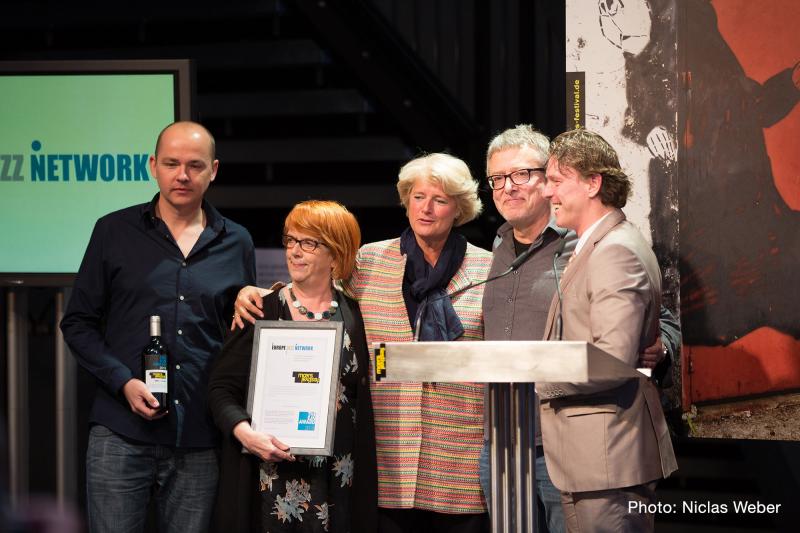 The EJN Award 2015 for Adventurous Programming was celebrated today during Moers Festival, winner of this year’s Award.

The Award Ceremony took place during the reception of the City Mayor in the Festival Hall. Ros Rigby, President of EJN, and Piotr Turkiewicz, EJN Vice President, congratulated the Festival team and the Artistic Director Reiner Michalke for the incredible work done in all these years in organsing a Festival that produces some of the most innovative music in the field of jazz and improvised music in Europe.

Prof. Monika Grütters, Head of Culture for the German Federal Government, Siegmund Ehrmann, Bundestag MP for North Rhine-Westphalia, and Christoph Fleischhauer mayor of the city of Moers also intervened during the reception and congratulated the Festival for the important contribution to the cultural sector in Germany and Europe, and for receiving the Award.

Ros Rigby said in her speech: “I have been really impressed of how the city of Moers has taken on such a role as a beacon in jazz and creative music. I congratulate the city and the region of North Rhine-Westphalia for having the courage to do this.“

Each year EJN, the European association of producers, presenters and supporting organisations who specialise in creative music, contemporary jazz and improvised music, awards a European promoter of jazz music who exemplifies the values of EJN and skilfully succeeds to create visionary and fascinating musical programmes for the audience.

The 2015 Award has been unanimously assigned by an independent jury of jazz professionals and EJN members to the Moers Festival, one of the oldest and yet most original jazz Festivals in Europe, for its commitment to always innovate and experiment while remaining faithful to its identity.

The Europe Jazz Network (EJN) was created in 1987 as a European association. Currently EJN includes 102 organisations (festivals, clubs and concert venues, independent promoters and national organisations) in 30 countries. EJN's mission is to encourage, promote and support the development of creative improvised music within the European scene and to create opportunities for artists, organisers and audiences from all different countries to meet and communicate. EJN is funded by the Creative Europe Programme of the European Union.