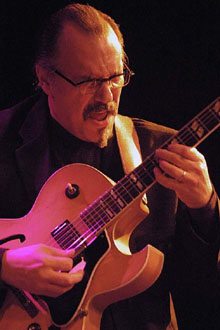 Click HERE to watch a free clip from the band's forthcoming live DVD.


Critics have called Musillami “a superior guitarist" (John McDonough, DownBeat) and “a protean player with a prolific output" (Bill Milkowski, JazzTimes), noting that his “intricate compositions are both thematically memorable and ear-grabbing due to their zealous playfulness" (Jay Collins, Signal to Noise). His flagship ensemble is his trio, which has performed in the U.S., Canada and Europe in addition to recording 2002's Beijing and 2005's Dachau, both on his acclaimed Playscape Recordings label. The Treatment, Musillami's 14th recording as a leader, follows 2006's Fragile Forms, the debut of his group Dialect featuring pianist Peter Madsen, bassist Drew Gress and drummer Matt Wilson.