Magos Herrera to Perform at BAMcafe on May 21 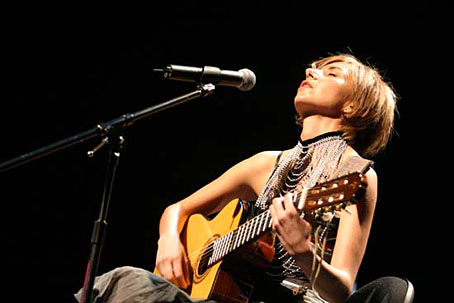 “Herrera creates a thoroughly modern expression of jazz performance and Latin culture onDistancia, easily holding the weight of an intelligent and complex sound with her prodigious musicianship." - Chip Boaz, The Latin Jazz Corner
“Though jazz long ago embraced Afro-Cuban influences that ought to make Mexico a logical bastion of the music, there are few well-known players from Mexico. But here is a brilliant singer, Magos Herrera, with a US debut on Sunnyside Records, recording with a top-flight band (Aaron Goldberg's piano, Lionel Louke on guitar, among others) and making Mexican jazz sound as obvious as chocolate ice cream." - Will Layman, PopMatters
“Magos' music is limitless and speaks straight to one's emotional self. Her music really brings a fresh and powerful coloration to the palette we call Jazz". - Dan Purcea, audience from Montreal Jazz Festival

Born in Mexico City, the deep and captivating performer, Magos Herrera is considered one of the most beautiful voices and the most active vocalist of the contemporary Latin American jazz scene.

In 2009 Sunnyside Records released Herrera's sixth album, Distancia, which climbed to the #1 spot on iTunes in the Jazz category. Herrera is joined onDistancia by an impressive cast of musicians featuring Lionel Louke on guitar, Aaron Goldberg on piano, Ricky Rodriguez on bass, and Alex Kautz on drums. Anchored by that stellar lineup, Herrera delivers a ten-track potpourri of original songs, and standards by Antonio Carlos Jobim, Milton Nascimento, and Cesar Portillo de la Luz.

Herrera is an accomplished singer-songwriter known throughout Mexico and Latin America for her beguiling rhythmic scatting, inflected with soulful Latin-Andalusian phrasings. Fluent in Spanish, Portuguese and English, her repertoire is filled with the yearning for romance, intimacy and enchantment of Mexican and Cuban son and bolero, and sultry, languid Brazilian beats.

Over the past 12 years, Herrera has taken the stage at numerous performing arts centers and festivals around the world, such as the Montreal International Jazz Festival, Jazz at Lincoln Center and Jazz Standard in New York, Millennium Park in Chicago, Teatro de la Ciudad de Mexico, Lunario del Auditorio Nacional in Mexico City, and Sala Galileo Galilei in Madrid, among many others. In her native country of Mexico, Herrera was nominated twice for “Lunas del Auditorio Nacional" (2006 and 2009) as the “Best Jazz Concert of the Year" among Bobby McFerrin and Bill Frisell.

Since moving to New York, Herrera has became a strong presence in the music scene, propelled by her successful concert at New York Winter Jazz Festival in 2008. She appeared on saxophonist Tim Ries' 2008 recording The Rolling Stones World Project II as well as Via Project (for contemporary composer Paola Prestini).