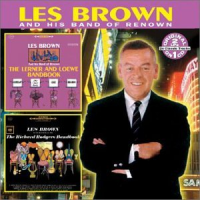 Les Brown's albums in the late 1950s and early 1960s are largely hit and miss. Some have punch while others sort of go through the motions. But when they hit, they're way out of the park. No other band had a swinging Hollywood sound like Brown's. Maybe it's because many of the recording band's West Coast players were working in TV at the time and slick as glass. Or because swing never left the West Coast ethos and survived all trends. Or perhaps Brown's orchestra, like the one led by Harry James during this period, was primarily a touring dance band and knew how to get feet moving. Whatever the reason, Brown's band had a powerful, gripping sound with the right arrangers on board.

Yesterday, while writing, I was in the mood for trumpeter Dick Collins. I had only planned to listen to Dick's two solo albums for RCA from 1954 (Horn of Plenty and King Richard the Swinghearted). But one thing led to the next and soon my iTunes was on to the Les Brown portion of my Dick Collins discography. About a half dozen songs in, I was thunderstruck by how good the music was. But what the heck was it? When I checked, it was Les Brown: The Richard Rodgers Bandbook. Wow!

When the 12-inch LP entered the stereo era in 1958, major labels used the big bands to showcase the new sound bouncing from speaker to speaker. Brown began this phase in 1959 with the Swing Song Book for Coral, a subsidiary of Decca. The Jazz Song Book for Coral followed months later. The point was to revitalize songs that Brown's fan knew with big, brassy, swinging arrangements.

In early 1960, Brown signed with Columbia and began a another series of songbook albums to champion stereo. Rather than focus exclusively on one show, like South Pacific, which he had done in 1958 with great success for Capitol, these albums were geared to cover a songwriter's best-known works, like the ongoing series by Ella Fitzgerald for Verve.

Brown started with Lerner & Lowe in October 1960, followed by Plays the Gershwin Bandbook in March 1961. The last of the three was easily the best: The Richard Rodgers Bandbook in April 1962. The record date was divided into two sessions: On I Could Write a Book, I Didn't Know What Time It Was, Have You Met Miss Jones?, Spring Is Here, People Will Say We're in Love, The Sweetest Sounds and The Lady Is a Tramp, the band's personnel was as follows:

On The Sound of Music, My Funny Valentine, Little Girl Blue, I Married an Angel and My Romance, there were two changes: Dick Collins was added on trumpet and Bob Drasdine replaced Frank Perry on alto saxophone.

The album is solid throughout. I did some research to see if I could find out who did the arranging but had no luck.  I'm guessing the pen belonged to Bill Holman or Marion Evans or both. Hopefully someone from the West Coast will fill us in.