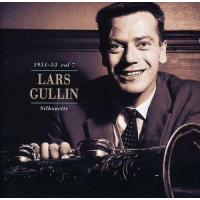 Lars Gullin was a giant of jazz who just happened to be from Sweden. He should be thought of on the same level as other 1950s baritone saxophonists who excelled in small groups, including Gerry Mulligan, Serge Chaloff, Jimmy Giuffre and Bob Gordon, among others. Gullin's dry, lyrical tone was probably closest to Mulligan's and Gordon's. What's interesting is that Gullin's tone pre-dated West Coast jazz. His cool-jazz sound dates back to 1951, and my guess it was influenced by Lee Konitz's and Stan Getz's visits to Stockholm that year.

Over the last few days, I've been listening to the 11-volume set of Lars Gullin on Sweden's Dragon label. The music is extraordinary and covers the entire 1950s. Gullin was a bebopper at heart but played the baritone sax with the flavor of Konitz and Getz—high up on the instrument's range and with an pale airiness that sounds great.

Born in Sanda, on Gotland, Sweden's largest island about three hours off the mainland, Gullin was a prodigy on the accordion, switching to the clarinet and later the alto saxophone. He moved to Stockholm in 1947 where he began working as a professional pianist. Filling the baritone saxophone chair of Seymour Österwall’s band in 1949 on a lark, he took to the instrument, viewing it as a perfect extension of his musical personality. Interestingly, his first major recording was with Konitz in 1951.

Unfortunately, the 11-volume set doesn't come in a single box. Instead, they are sold individually. Let me list the different albums... The material is enormously satisfying, and once again, there isn't a dud among the 117 tracks. Gullin died of a heart attack in 1976 after years of addiction to methadone.