Karrin Allyson Earns Early Raves for 'Round Midnight' CD, out 5/3 on Concord Jazz 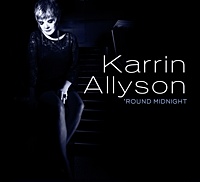 On 'Round Midnight, Allyson weaves an elegant, understated dreamscape featuring 11 songs by some of the most storied writers in jazz, Broadway and pop music, from Duke Ellington to Stephen Sondheim to Paul Simon&#151a full track listing follows. The acclaimed release, the singer's thirteenth on Concord Jazz, marks the first time that Allyson plays all the keyboard parts—piano and Rhodes. The subtle production lets Allyson's voice shine, as she delivers melancholy, mature takes on such classics as 'Send In The Clowns,' Charlie Chaplin's 'Smile,' Johnny Mandel's 'The Shadow of Your Smile," Ellington's 'Sophisticated Lady,' and more. Allyson will tour this Spring in support of the album, and an itinerary follows, below.

Over the course of her storied career, Allyson has earned coverage from some of the most respected critics in America. In a NY TIMES concert review, Stephen Holden observed: “Ms. Allyson is really a jazz equivalent of Bonnie Raitt. She approaches a romantic song from a perspective that is wised up and well defended but not quite tough. I couldn't imagine her falling for a line of sweet talk." In a separate live review, Holden noted, “She doesn't preen, flirt or act coy. What you see and hear is what you get: a musically and psychologically centered gamine, deeply schooled in jazz...and devoid of grandiosity." The NY TIMES' Ben Ratliff has described Allyson's voice as “expressive, a little scratchy, brassy and generous, more committed to swing." Veteran jazz critic Don Heckman wrote in The LA TIMES, “Allyson has another attribute that has consistently placed her in the top level of jazz vocal artists: utter musical fearlessness." In The Washington Post, Mike Joyce praised the singer's “soulful way with a ballad, quiet and haunting. Part of the fun of listening to Allyson, however, is hearing how gracefully she moves from ballads and bop to contemporary pop and bossa nova."

The set opens with Bill Evans's “Turn Out the Stars," a song whose poignant lyrics by Gene Lees are made even more heartbreaking by Allyson's decision to slow down the tempo and stretch the time at certain points along the way. The followup track is a quiet reading of Paul Simon's “April Come She Will" that examines the human heart through the prism of changing seasons.

Further in, Allyson delivers a wistful rendition of “Spring Can Really Hang You Up the Most," the bittersweet standard by Fran Landesman and Tommy Wolf, based on the classic T.S. Eliot line: “April is the cruelest month..." “I've sung this song for years and always wrestled with its long form and many lyrics," says Allyson. “I wanted to make it swing, yet still have it convey the sadness of the story that's told in the lyrics." Allyson closes with the title track, Monk's iconic composition that puts the final touch on the jazz club vibe that has taken shape amid the preceding ten tracks.