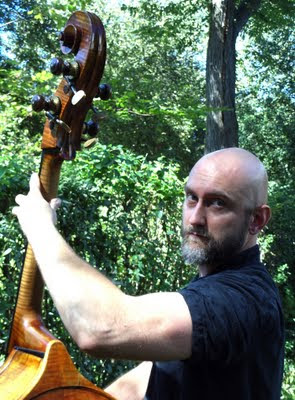 Chicago writer, musician and educator Karl E. H. Seigfried was named winner “Best Religion Weblog” in the thirteenth annual international Weblog Awards (2013.bloggi.es). The awards, announced March 24, cover thirty categories. It is the second consecutive win for Seigfried’s Norse Mythology Blog (norsemyth.org), which covers Norse myth and religion and features in-depth essays on all aspects of the mythology, as well as interviews with major artists, authors, musicians and activists whose work is centered on Norse myth and religion. Seigfried’s interview subjects have included bestselling novelists (Joanne Harris, English author of Chocolat, Runemarks, Runelight), musicians (Johan Hegg of Sweden's Amon Amarth) and religious leaders (Hilmar Örn Hilmarsson of Iceland's Ásatrúarfélagið). The Norse Mythology Blog offers a large archive of articles on current events and the latest scholarship and also answers questions from readers and researchers looking for credible and scholarly information on a religion that has often been mis- or under-represented.

Seigfried teaches both religion and music at Carthage College, where his Norse religion class is the first and only course on the subject taught in a United States religion department. He is Associate Editor of Óðrœrir Journal and Founder & Faculty Advisor of the Carthage College Tolkien Society. In addition, he currently teaches Norse mythology at Newberry Library and has taught myth classes for Loyola University Chicago. Seigfried has also been a featured writer and lecturer at the Joseph Campbell Foundation and the Wagner Society of America. He's a member of the Society for the Advancement of Scandinavian Study, Viking Society for Northern Research (UK) and Religion Newswriters Association, and he’s the Official Norse Mythologist of the Stephanie Miller Show.

Music fans may be more familiar with Seigfried for his work as musician. Over the past 20 years, the critically-acclaimed bassist and guitarist has remained deeply involved in the Chicago music scene, performing and recording in virtually all musical styles — jazz and classical, country and rock, traditional and avant-garde. Seigfried has performed as a soloist with both the Chicago Sinfonietta and the Rockford Symphony Orchestra and is Principal Bassist of Chicago orchestras including the Chicago Modern Orchestra Project and New Black Music Repertory Ensemble.

As a jazz bassist he has performed with such diverse groups as the AACM Great Black Music Ensemble and the Glenn Miller Orchestra and regularly plays with Alan Gresik's Swing Shift Orchestra at the Green Mill. As both leader and sideman, he has performed with great artists including Bobby McFerrin, Jimmy Ellis, Nicole Mitchell, Fred Anderson, Jeff Parker, Henry Grimes, Roscoe Mitchell and George Lewis.

The next Norse Mythology Blog project bridges Seigfried's mythological and musical interests by featuring interviews with bandleaders of Ensiferum (Finland), Týr (Faroe Islands) and Heidevolk (Netherlands) - all of whom Seigfried interviewed at Chicago’s April 13 Paganfest America IV at Reggie’s Rock Club. Seigfried will also be publishing reflections on his April 12 appearance as a Norse mythology expert on the History Channel's “Ancient Aliens" program.