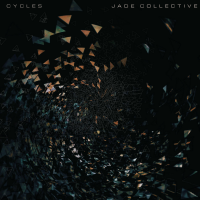 Jade Collective is a group of talented musicians with the common goal of bringing freshness, personality and innovation to the world of modern jazz music.

Their most recent EP features five songs that blur the lines between a wide range of musical influences. The first song, “Light” showcases beautiful ambient soundscapes and piano parts that make me think of artists like Brian Eno. Over the beautiful droning textures, a set of beautiful acoustic instruments and passionate vocals create an intimate indie-folk soundscape. The song is soothing, warm and pleasant, offering a candle-lit atmosphere, reminiscent of early Daughter.

The title track itself is a stunning song with a fantastic sound and a testimony of how diverse the tones of this EP can be. The beautiful volume swells in the intro combine organically with a sparse, yet rhythmically intriguing beat that creates a mesmerizing atmosphere. Catey Esler’s beautiful vocal tone makes me think of singers like Imogen Heap or Dido, and the textures of this production area really distinctive, going for a “live band” vibe that still sounds very clean and focused.

There is room for a beautiful interlude, also featuring Isaac Wang. The guitar parts are reminiscent of genres such as post-rock, shoegaze and math, but with a distinctive modern jazz flair, giving them an avant-garde feel. The beautiful vocal pads are stunning and emotional, perfectly complementing the guitar melodies. The court song is a track titled “Don’t,” which also features Ben Wendel. This happens to be one of my personal favorites here, as the guitar work is truly astonishing. I love the laid-back, dynamic sound of the drums, as well as how the vocals fall into place beautifully with all of the other elements in the mix. The chord progressions and the selection of sounds are absolutely stunning and innovative in this particular context.

The final song, “Lilith,” brings back the acoustic guitars prominently, bringing a more upfront folk influence to the mix.

Jade Collective is an NYC based indie-jazz band led by Jan Esbra and Catey Esler. Their music is influenced by their diverse musical backgrounds, drawing from alternative rock to folk to create a sound all their own.

In September 2016, Jade Collective released their debut album Clarity which was successfully crowdfunded through Indiegogo. Since their start in 2016, Jade Collective has toured as supporting act for world-renowned singer-songwriter, Becca Stevens and has held residencies at The Middle East in Boston as well as The Shrine & Silvana in New York. In 2016 their original song “Beyond the Last Thought” won a Downbeat Student Music Award for Undergraduate College Outstanding Composition.

Jade Collective is set to release, Cycles, a brand new 5-track EP in December 2020. The EP was recorded at Ovation Sound in Winston Salem, North Carolina.