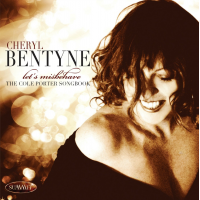 slideshow
Los Angeles, CA—When soprano Cheryl Bentyne was recovering from cancer treatment and starting again to sing, it was to Cole Porter she first turned as her “saving grace.” With his songs fresh in her mind from recently recording Let’s Misbehave—The Cole Porter Songbook—Cheryl connected with Porter’s ability to “cover the human condition,” healing along with the music she calls “perfect, joyous and a thrill to sing!”

Now, nearly a year after the diagnosis, followed by surgery and chemo, Cheryl—for 30+ years the reigning soprano with 10-time Grammy winning vocal group, The Manhattan Transfer—celebrates her new cancer-free status with the release of Let’s Misbehave on Summit Records, due out August 14. And she’s celebrating the weekend before with a CD release party and All Star Jazz Benefit for the City of Hope Cancer Center at the Catalina Jazz Club in Hollywood.

Bentyne’s Let’s Misbehave offers 14 of Porter’s most memorable tunes including two with the late saxophonist James Moody who passed away in December 2010. He joined Cheryl as her special guest in What Is This Thing Called Love and in her all-time favorite, Ev’ry Time We Say Goodbye—now particularly bittersweet. She sang this one live in the studio with Moody; it would be one of his last recordings. “James was one of the sweetest souls there ever was and one of the most powerful legends of jazz,” remembers Bentyne. “Just a dear, dear man.”

With a stylistic breadth covering nearly 30 years of Cole Porter’s prolific output, the songs range from the 1927 title track Let’s Misbehave, to All of You, written for the 1955 Broadway musical Silk Stockings. Inspired by the 1960’s Swingle Singers, Cheryl incorporates “a little bit of Bach” into the intro of You'd Be So Nice To Come Home To, noting that she’d always wanted to do a little bit of Classical [music]. Begin the Beguine is her spin on a Sammy Davis Jr. a cappella version of the song. “I did it in one take,” she says. “When you really listen closely with just the voice and the melody, it is such a sophisticated song; the changes are so intense.”

High praise has been showered on Cheryl’s solo work. From JazzTimes: “Tempting as it is to number Cheryl Bentyne’s The Gershwin Songbook among the most satisfying vocal albums of 2010, such praise is unfairly limiting. Instead it must be lauded as one of the year’s most accomplished albums, period.” And jazz reviewer Don Heckman described one of her live 2011 solo concerts as “Dynamic. Enchanting. High-spirited. Entertaining. Hard swinging.”

Cheryl hopes that listeners are as smitten with Cole Porter’s music as is she. “His songs are more than tunes. They’re little houses in which our hearts still live. When we hear them we go visiting…we walk forgotten streets…we smile again at the skies of youth.”

Let’s Misbehave is internationally released on Summit Records (catalogue number SMT 595) and retails for $16.98. It also will be available on iTunes. To follow Cheryl’s personal journey with Hodgkins Lymphoma, Chemo Cocktails 4 Two, read her blog.