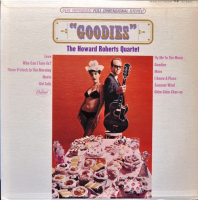 slideshow
Of the dozens of studio guitarists who all but lived in the jazz and pop recording studios of Los Angeles in the 1960s, Howard Roberts probably had the easiest sound. With the advent of pop-rock in 1964, Roberts earned a solid living adding the guitar to albums marketed to adults. But it would be unfair to categorize Roberts as Easy Listening, since he was nearly always swinging and was often accompanied by an organ, which gave his sound a soulful, hip twist.

Though Roberts recorded a couple of albums as a leader in the mid-1950s for Verve, he didn't come into his own until 1963, when he began recording for Capitol. Roberts recorded 10 albums under his name for the label between 1963 and 1969 that straddled jazz and pop—including swinging movie themes, British Invasion hits, transistor radio singles and even Sinatra fare. All are uniformly good, since Roberts was a master of teasing out any song's essence and beauty.

Among my favorites is Goodies, Roberts fourth album for Capitol that was recorded in 1965. On the album's tracks, Roberts was backed by his trio. But the artists who joined in on the different tracks were wide-ranging. Here are the original album's two sides (A and B) and the varied personnel accompanying Roberts, who plays solo guitar:

From Goodies you can proceed to all the other Roberts titles on Capitol. The music isn't hard-core jazz but it does dance around playfully and doesn't get in the way as you write or work. Roberts died in 1992.