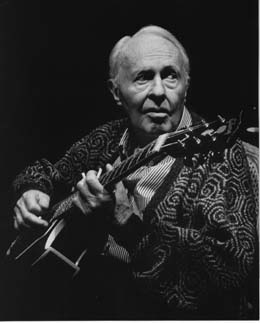 slideshow
He was perhaps best known for his work with the Oscar Peterson Trio but also played with Jimmy Dorsey and Ella Fitzgerald during his long and varied career.

Herb Ellis, a jazz guitarist perhaps best known for his work with the influential Oscar Peterson Trio, has died. He was 88.

Ellis, who had Alzheimer's disease, died Sunday morning at his home in Los Angeles, said his son, Mitch.

During his long and varied career, Ellis played with Jimmy Dorsey and Ella Fitzgerald. He also worked as a studio musician and played in the bands of several television shows, including Steve Allen's and Merv Griffin's.

“There have been changes in jazz and new styles come along. I play straight ahead -- what you might call mainstream jazz," Ellis told the Columbus Dispatch of Ohio in 1996. “That's what I played when I started and that's what I still play. I wish everyone else good luck and God bless, but I've found mine and I'm going to stick with it."

He was playing with two other former members of Dorsey's band, pianist Lou Carter and bassist John Frigo, in the drummer-less trio Soft Winds in 1952 when Peterson saw the group in concert in Buffalo, N.Y.

“He liked it. So he and I went out later that night and jammed at some place in Buffalo," Ellis told The Times in 1993. “I didn't see him again until 1953 when [guitarist] Barney Kessel left his group. That's when he called me for the job."