Guitarist Thom Douvan Returns With His Most Eclectic Release Yet, All Over Again 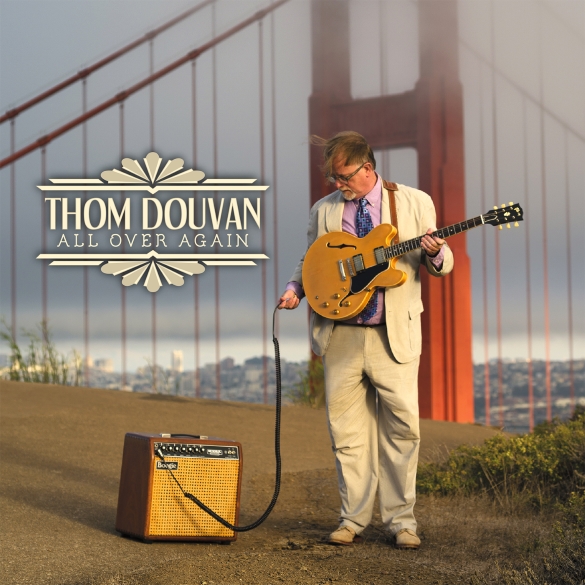 Los Angeles - As a followup to last year's critically acclaimed release 'Brother Brother', guitarist Thom Douvan stretches into some different territory on his new album All Over Again. Accompanied by such stellar musicians as keyboardist Mitchel Forman, bassist Jimmy Earl, percussionist Luis Conte and drummer Michael Barsimanto, Douvan pushes the envelope on nine original compositions and one well-chosen cover tune. “I see it as a continuum of the jazz, blues and soul music I featured on the last album, with a little bit more rock thrown in this time,” says the former Detroit session man who is currently an in-demand player on the Los Angeles studio scene.

All Over Again is the third CD released by composer-bandleader- guitarist Thom Douvan. Like his earlier soul-jazz tribute to the Motown Funk Brothers 'Brother Brother', which one critic called a “throw-back release with plenty of modern day flair”, Douvan's new recording All Over Again recalls an era in music when the labels on music did not matter. Painting with a broad musical palette, the music on this new CD runs the gamut from soul to smooth jazz, adult contemporary to jazz fusion, World music to New Orleans funk, and straight ahead jazz.

This record features all original instrumental and vocal compositions by Thom, plus a lovely vocal ballad written by fellow Detroit guitarist Kenny Burrell sung by the great Lynne Fiddmont, who is currently on tour with Natalie Cole and has previously sung with Stevie Wonder, George Duke, and the Crusaders. The basic rhythm tracks on All Over Again were recorded at Stagg Street Studio in Van Nuys, California in two day-long sessions featuring the killer rhythm section of Mitchel Forman on piano, Michael Barsimanto on drums, Jimmy Earl on Fender bass, and Trey Henry on acoustic bass. Overdubs and mixing were performed at several studios in Los Angeles and the San Francisco Bay Area. Final mixing was performed by Co-Producer Michael Parlett at Talented Studio in Los Angeles.

“This is a snapshot of some of my favorite influences and music,” says Douvan, who cites Billy Cobham’s 'Spectrum', Robben Ford’s 'Inside Story' and David Spinozza’s self-titled debut from 1978 as big inspirations for this recording. “I just kind of stood out of the way and let the music happen. And with the caliber of players on this record, I didn’t have anything to worry about.”

Along the way you can also hear the influence of such respected rhythm guitarists and soulful soloists as David T. Walker, Phil Upchurch and Cornell Dupree in his playing, as well as touches of such jazz icons as Wes Montgomery, Grant Green, Larry Carlton and Detroit’s own Kenny Burrell.

From fusion (“Sephardia”) to smooth jazz (“Deja Vu All Over Again”), swinging jazz (“Wes Coasting”), classical and bluegrass (“Rhonda”) and funk (“Believe in You”), Douvan cuts a wide stylistic swath on his third outing as a leader. And he comes by his eclecticism honestly. Thom recalls, “Growing up in Ann Arbor in the early '70s, I came of age musically seeing all the great performers like Count Basie, Miles Davis, Magic Sam, Howlin’ Wolf, Muddy Waters, The Duke Ellington Orchestra and others at the Ann Arbor Blues & Jazz Festival. It really was an era where there were not so many barriers between different kinds of music. People could go between styles easily. I really miss that freedom, so I wanted to explore that on my own self-produced CDs.”

Though Thom currently splits his time between the Bay Area and Los Angeles, his heart is still deeply imbedded in the Motor City, where he gained invaluable bandstand experience during the '80s with a group of former Motown session men collectively known as The Funk Brothers. Those funk and soul-jazz roots run deep with the Ann Arbor native, proving you can take the man out of Detroit, but you can’t take Detroit out of the man! While attending law school in Ann Arbor, Douvan began playing with The Funk Brothers around 1985, long before those Detroit musicians appeared in the successful 2002 documentary 'Standing in the Shadows of Motown', which effectively launched their second career. He worked with The Funk Brothers until 1992, when he relocated to California.

While Douvan has accumulated an abundance of chops since his stint at the Berklee College of Music in Boston and his subsequent 40 years as a working professional, he downplays his technical prowess. Says Thom, “I'm into the soul groove. I like to lay into the pocket. I'm a roots player. I love Americana...anything from the roots. But I gravitate towards soul music, that's my thing.”

Here's what the press have raved about Thom Douvan:

“In something of a musical triumph, he manages to transform the songs while remaining true to their spirit.” – Jack Goldstein, Blog Critics.org

“This R&B tribute offers flavorful reworkings of songs like 'That's the Way of the World,' 'What's Going On,' 'Sara Smile,' 'Isn't She Lovely' and others. Guitarist Douvan is backed by superb Hammond work from a series of organists along with crisp drumming and held-note saxophones." Marc Myers, Jazzwax.com

In closing Thom has this to impart, “As Duke Ellington said, 'There are only two kinds of music, good and the other kind.' Hopefully the listening audience will find some music here on this eclectic program that will resonate with their musical tastes.”

In support of the CD release, Thom has several shows scheduled and in the works in Los Angeles, San Francisco, and Detroit. He then hopes to push beyond those regional areas and take this music to appreciative audiences wherever they may be.

To purchase Thom Douvan's 'All Over Again' CD: Log onto iTunes, Amazon and CD Baby on or after March 4, 2014.